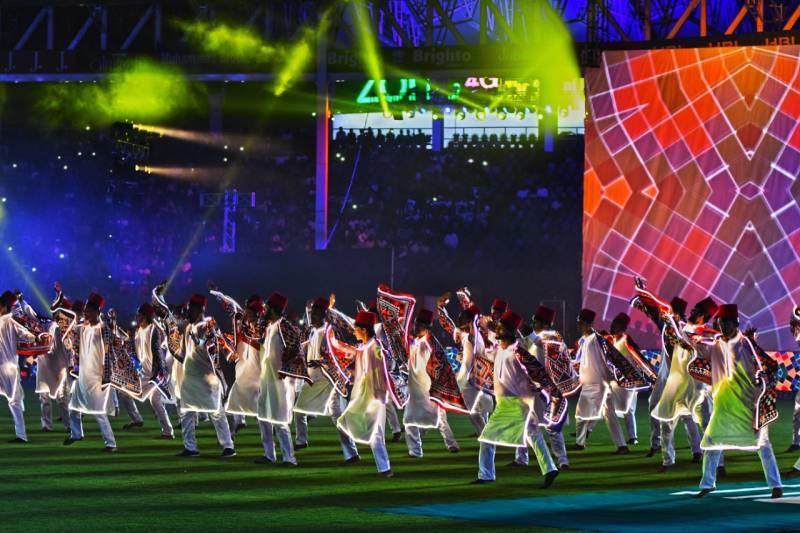 For the first time in its young history, the entire league is taking place in Pakistan with Karachi set to host nine fixtures, Lahore 14, Rawalpindi eight and Multan three between February 20 to March 22.

Thousands of fans and lovers of PSL are present there in the national stadium and as many as 350 artists from different music genres – Sufi, pop, rock, bhangra and folk – will come together to perform at what will be the biggest opening ceremony in the history of the HBL PSL.

The ceremony started with national anthem and the whole crowed stood up in honor of the anthem. Strict security arrangements are in place on the occasion.

Soon after the ceremony which includes riveting acts and a spectacular fireworks show, the first match will be played between defending champions Quetta Gladiators and Islamabad United at the same ground.

The toss for the first match will be held at 8.30pm, while the much-anticipated first ball of the HBL PSL 2020 will be delivered at 9pm.

The tournament carries a total prize purse of US $1 million with the winners collecting a cheque of U$ 500K along with a glittering and brand new trophy, while the runner-up will receive a cheque of US$200K.

There will be the number of other cash awards, including U$4,500 each to all the 34 players of the matches. Furthermore, US $80K will be equally distributed to player of the tournament, best batsman, best bowler and Spirit of Cricket. The remaining amount will be distributed for other match-related awards like best catch, best run-out and most sixes.

The PSL 2020 is the biggest cricket extravaganza, taking place in Pakistan and first since the six-team Asia Cup 2008. Twelve years ago, the then four Test-playing countries were joined by the United Arab Emirates and Hong Kong in a 13-match tournament in Karachi and Lahore. Sri Lanka had defeated India in the final at the National Stadium by 100 runs.

Prior to this tournament, Pakistan had staged the ICC Men’s Cricket World Cup 1987 and 1996.

The league follows the double round-robin format with each team playing the other five teams twice each in the league stage.

Following the group stage will be the standard playoffs format in which the teams ending first and second get to clash in the Qualifier, while the winner moves straight to the final. The losing team will get another chance to have a go at the final berth in Eliminator-2, where they will clash against the winner of the Eliminator-1. The team losing the Eliminator-1 will be knocked out of the event.

The Qualifier will be played on March 17 in Karachi. The Eliminator 1, Eliminator 2 and the Final will take place in Lahore on March 18, 20 and 22 respectively.