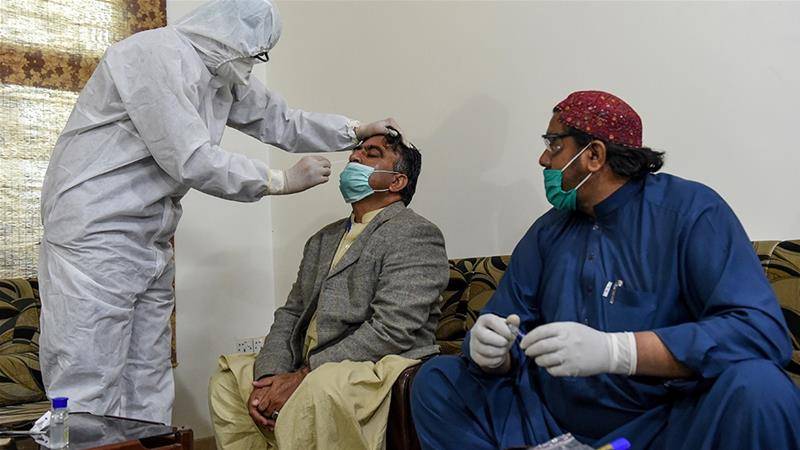 ISLAMABAD – The National Command and Operation Centre (NCOC) for COVID-19 informed Prime Minister Imran Khan on Thursday that a decline was witnessed in the number of cases tested positive in last four days.

The prime minister visited NCOC for a meeting which was attended by Chief of Army Staff General Qamar Javed Bajwa and chief ministers of all provinces.

PM was also briefed on the steps taken so far regarding curtailing the spread of COVID-19 across the country, enforcement of SOPs, and strategy regarding the management of disease and implementation of decisions in coordination with all the stakeholders.

On the occasion, the Prime Minister Imran Khan directed that all out efforts must remain focused on controlling the disease spread.

He asked to ensure availability of medicines, oxygen and beds in hospitals.

PM also directed all Pakistanis to protect the elderly and sick especially those suffering from Heart related diseases and Diabetes.

The Prime Minister, while lauding the role of NCOC, said Pakistan has navigated COVID-19 in a balanced manner. However, he cautioned everyone for utmost care. We need a unified and well-coordinated joint national response to fight the disease during the next couple of months; our actions will determine the extent of the crisis and success of our response through consensus, stated the Prime Minister.

Imran Khan, while paying tributes to the sacrifices of healthcare workers, said they are doing us proud at this critical juncture and the entire nation recognises their contribution.

He said that media has performed responsibly , any tendency to sensationalise must be self-checked by them.

Meanwhile, the participants were especially apprised of the gaps identified and measures being taken for improvement in the healthcare system of the country to cope with the challenge, capacity building of the healthcare professionals, increased availability of beds for the patients, uninterrupted availability of crucial medicines, and sufficient supplies of oxygen.

The participants through a consensus resolved to continue the strategy of balance between life and livelihood being pursued. It was reiterated that while businesses must remain open, strict implementation of SOPs will be ensured through awareness and administrative actions.

Smart lock downs in hot spots identified through use of technology tools recently deployed and developed by NCOC will be ensured.

The forum was also briefed on the use of digital technology for contact tracing and disease projection. It was informed that during the last four days, there is a decline in the number of cases tested positive.

Chief Ministers of all the provinces and Prime Minister AJ&K briefed the forum about the steps being taken in their respective areas and unanimously acknowledged the support provided by the Federal Government in all respects.