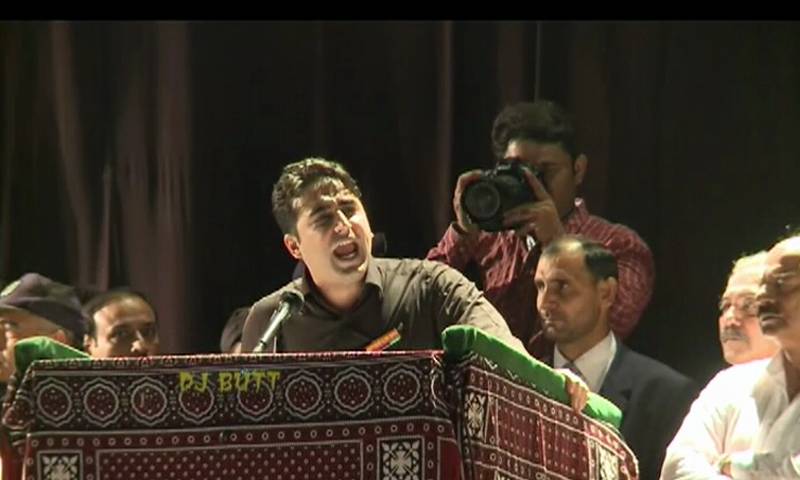 HYDERABAD - Pakistan People's Party (PPP) Chairman Bilawal Bhutto accused the PML-N of upholding a corrupt system that exploits the poor and declared that PPP's struggle is against that unfair system.

He claimed that conspiracies were being made against democracy. He was addressing a rally in Hyderabad on Wednesday to mark to the 10th anniversary of Karsaz blasts.

In a fiery speech, the PPP chief said that his party has been facing challenges against dictators since its inception. Bilawal said that PPP's founder Zulfiqar Ali Bhutto along with his supporters, that included students and labourers, had struggled against General Ayub Khan and later against General Zia ul Haq.

"These people use corruption as a mere slogan," Bilawal said. "But corruption cannot be ended till farmers and labourers continue to be exploited."

Addressing a large gathering of charged-up supporters waving party flags and chanting slogans in support of the party, Bilawal criticised the stance of Pakistan Tehreek-e-Insaf Chairperson Imran Khan, saying there are some politicians who have not yet come out of the cricket ground.

PPP has faced challenges ever since its inception, he added. "After Zulfikar Bhutto was hanged, Benazir and Nusrat Bhutto took charge of the party and proved the dictators wrong."

On the one hand was PPP, Bilawal said, while on the other were the politics nurtured by dictators.

On the anniversary of the twin blasts at Karachi's Karsaz during the homecoming rally of slain PPP leader Benazir Bhutto, her son paid tribute to those martyred in the twin bombings on October 18 in 2007.

While addressing a rally in Hyderabad, the PPP chairperson lauded the courage of those who "did not run away after the first attack but instead rushed towards their leader, Benazir Bhutto, and embraced martyrdom in the second blast".

The PPP chairperson also criticised the motorway constructed under the rule of Pakistan Muslim League-Nawaz. "Your so-called motorway has so far claimed hundreds of lives."

Other leaders of the party were also present on the stage with Bilawal.

Earlier in the evening PPP leader Naveed Qamar addressed the rally, saying martyrdom takes PPP higher in rank. But, he added, those behind the Karsaz attack are still alive.