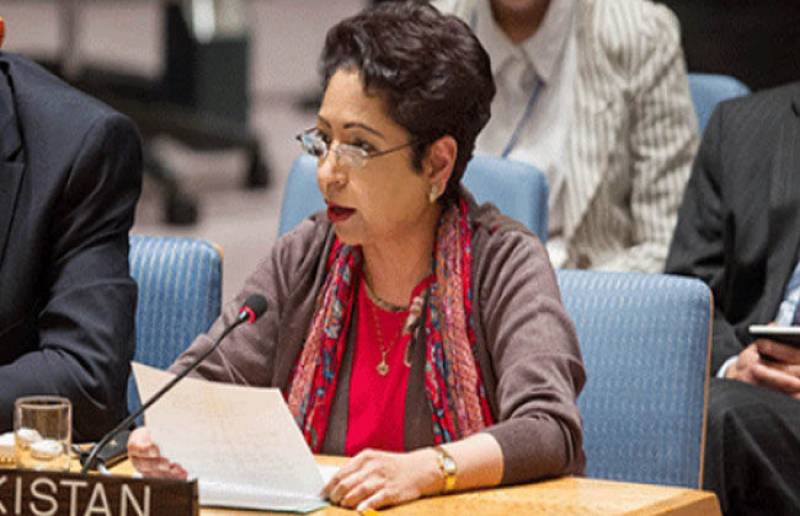 ISLAMABAD (Web Desk) - Pakistan’s Permanent Representative to United Nations Dr Maleeha Lodhi on Friday said India is a non serious in solving the Kashmir issue and it is obligatory upon the United Nations to persuade the Modi government for peaceful settlement of this longstanding conflict.

“India is a non serious in getting a resolution to the Kashmir conflict. India’s arrogance is deteriorating situation in the area that can be a threat to regional and international peace and security,” she said speaking in a private TV program.

Dr Maleeha said Pakistan is making continuous efforts that United Nations fulfills its long standing obligation for solving of the Kashmir issue and Pakistan is also writing to India in response to their letter, to sit with Islamabad and find out a solution to this dispute according to the UN resolution and aspirations of Kashmiri people.

“But, with their refusal to discuss and resolve this issue, according to the UN resolution and Kashmiri peoples’ aspirations, I fear the situation will not return to normalcy,” she added.

Dr Maleeha Lodhi said Pakistan is highlighting this issue at all forums to seek international attention and the letter of the UN Secretary General to Prime Minister Nawaz Sharif is an evidence of our efforts. “The UNSG has offered to play a role if both the countries agree. PM’s letter has been properly responded and also circulated among the UNSC members as an official document.”

She said the consent of the UN Human Rights Commission to send a fact finding mission to Indian occupied Kashmir will exert pressure on India. At a time when the attention of the international community is towards number of global issues,

Pakistan is trying to divert this attention also towards the Kashmir issue.

Dr Maleeha said Pakistan is trying to bring the UN resolution in focus once again to get international diplomatic support for the Kashmir issue and its peaceful resolution for regional peace and security.

She said concerted efforts are underway on bilateral and international levels as Pakistani envoys at the capitals of various countries are trying to highlight Indian atrocities and miseries of the innocent Kashmiris.

Dr Maleeha Lodhi said after our efforts at different forums and reporting by the international media, now political parties, the media and civil society within India has also started believing and saying that the movement of Kashmiri people was indigenous and not sponsored from abroad. They are also pressurizing the Modi government to seriously think on resolving this issue.