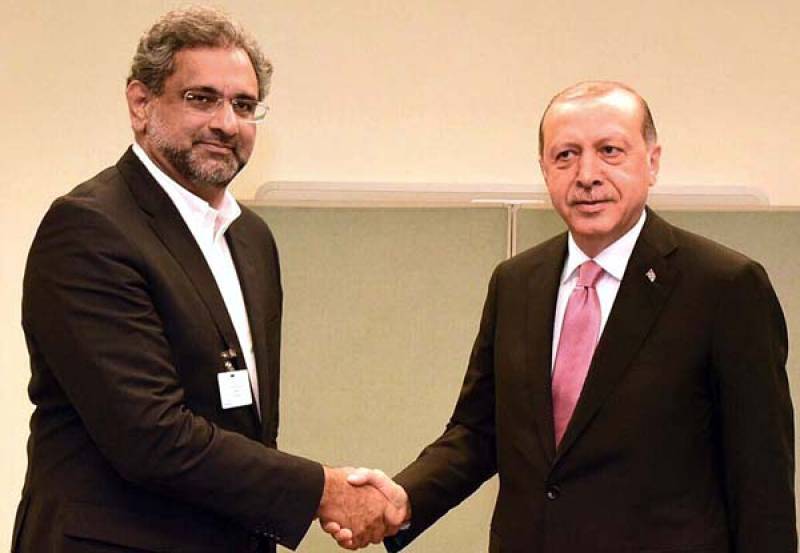 NEW YORK - Pakistan and Turkey Tuesday discussed ways to enhance economic cooperation and agreed to work together for early finalisation of the Free Trade Agreement (FTA) for boosting their bilateral trade.

They had an in-depth exchange of views on ways to further strengthen bilateral relations besides reviewing regional peace and security situation. They agreed to continue joint efforts for bringing peace and stability in Afghanistan.

Both the sides noted that there was no military solution to the Afghan conflict and stressed the need for efforts for a regional approach for an internal political settlement in Afghanistan through an Afghan-owned Afghan-led peace process.

The leaders emphasized the need for the two countries to continue to work together in all areas for mutual benefit.

Pakistan and Turkey also agreed on the revival of the Pakistan-Afghanistan-Turkey Trilateral process for promoting lasting peace and stability in Afghanistan.

Linkages between the people of the two countries had transformed into a strategic partnership that was strengthening with each passing day, he said.

The two sides also appreciated the regular high level exchanges between the two countries and the institutional interaction through the High Level Strategic Cooperation Council. Abbasi and Erdogan also expressed satisfaction over deepening of cooperation through political, defence, trade and investment exchanges. -APP