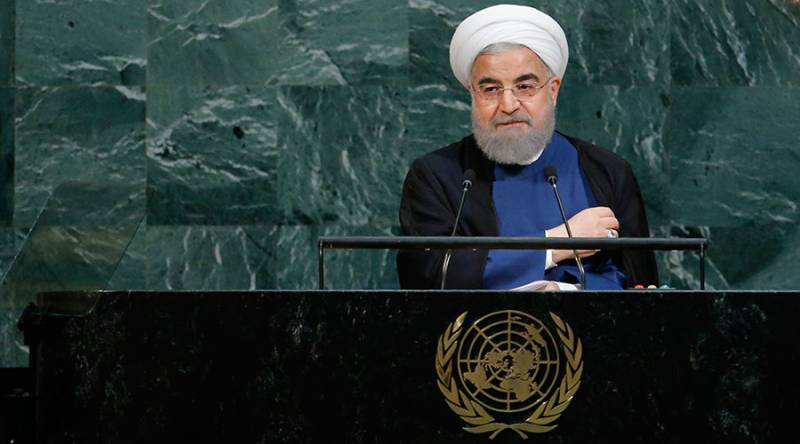 NEW YORK - US President Donald Trump’s UN speech was a “violation” of the 2015 Iranian nuclear deal, Iran’s President Hassan Rouhani said on Wednesday. He added that in case the deal collapses, Tehran could return to the high level uranium enrichment that is needed for its reactor fuel.

Iran will respond “decisively” to any violation of the 2015 nuclear deal by “any party,” President Hassan Rouhani said in his speech at the UN General Assembly earlier on Wednesday, as he hit back at US President Donald Trump.

"I declare before you that the Islamic Republic of Iran will not be the first country to violate the agreement," the Iranian president said, adding that Tehran “will respond decisively and resolutely to its violation by any party.”

He went on to say that “it will be a great pity if this agreement were to be destroyed by 'rogue' newcomers to the world of politics – the world will have lost a great opportunity,” apparently referring to Trump, who earlier called the Iranian nuclear deal, officially known as the Joint Comprehensive Plan of Action (JCPOA), “one of the worst and most one-sided transactions” and an “embarrassment” to the US.

Rouhani then warned that “by violating its international commitments, the new US administration only destroys its own credibility,” and once again said that Tehran does not plan to withdraw from the deal and return to nuclear weapons development.

However, in August, Iran’s president warned that Tehran is ready to withdraw from the deal within “not a week or a month but within hours” and return to its nuclear program should Washington impose new restrictions against it.

The Iranian leader then criticized the US president’s Tuesday speech to the General Assembly, calling it “ignorant, absurd and hateful rhetoric filled with ridiculously baseless allegations.”

In his speech, Trump called Iran a “depleted rogue state whose chief exports are violence, bloodshed, and chaos,” saying that it funds “terrorists that kill innocent Muslims and attack their peaceful Arab and Israeli neighbors.”