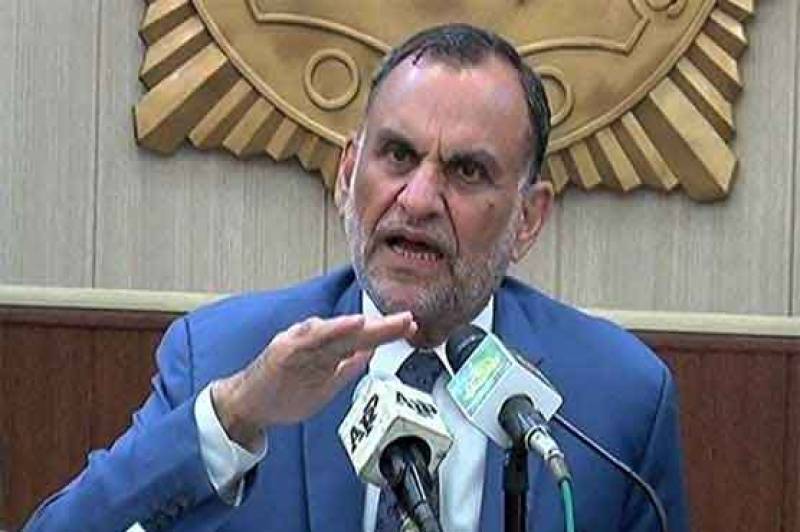 Railways Minister Azam Khan Swati on Monday slammed the Election Commission of Pakistan (ECP) for serving him a show-cause notice.

Swati asked how many notices have been sent to PML-N Vice-President Maryam Nawaz and JUI-F chief Maulana Fazlur Rehman.

"How many notices has the ECP sent to Maryam Nawaz and Fazlur Rehman that it has sent a notice to me?" Swati asked the body while addressing a press conference alongside Adviser to Prime Minister on Parliamentary Affairs Dr Babar Awan in Islamabad.

The ECP had issued notices to Swati and Federal Minister for Information and Broadcasting Fawad Chaudhry last week after they levelled allegations against the institution.

The railways minister said Chief Election Commissioner (CEC) Sikandar Sultan Raja was "speaking the language of the Opposition and the incumbent government was facing it".

The minister said the PTI-led government would make the election commission an independent institution, as he mentioned that several matters regarding the CEC's appointment were still kept "secretive."

Speaking at the press conference, Awan said the government was moving forward in its electoral reforms, including the introduction of electronic voting machines (EVMs) and i-voting.

The adviser stated that perception is being created that PTI will try to rig the elections through EVMs in 2023. However, he said, the idea of using the machines was first presented during PPP's tenure.

"The electoral reforms are being made controversial," he said, adding that the government was ready to extend an olive branch to the Opposition to work on the reforms together.

Awan said the Opposition wants the electoral reforms bill to be presented in a committee comprising members from both houses — Senate and National Assembly. "The government is ready to do it," he said.

The PM aide said he would request Senate Chairman Sadiq Sanjrani to form a committee in this regard, but he cast aspersions on the Opposition's demand, as he feared that they would play "committee, committee" and not reach a consensus.

Awan said under the constitution, the incumbent government would not hold the polls in 2023, as he tried to highlight that the current regime would not be involved in the elections process.

Prime Minister Imran Khan and the current government are trying to ensure transparent elections take place in the country, he said.

Responding to a question, he said that the chief election commissioner and Opposition should be asked as to why they were afraid of the EVMs.

"Last week, we held talks with the Opposition members on directives of the prime minister. We do not have problems with the ECP, we have an issue with Raja Sikandar who is the representative of Shahbaz Sharif," he said.

The adviser pointed out that the government had time and again made attempts to speak to the Opposition and ECP on reforms, but they did not bear fruit. He stressed that the bill would pass by the Parliament, as the government has the required representation.

"If we have to go to the Supreme Court against ECP, we will," he added.