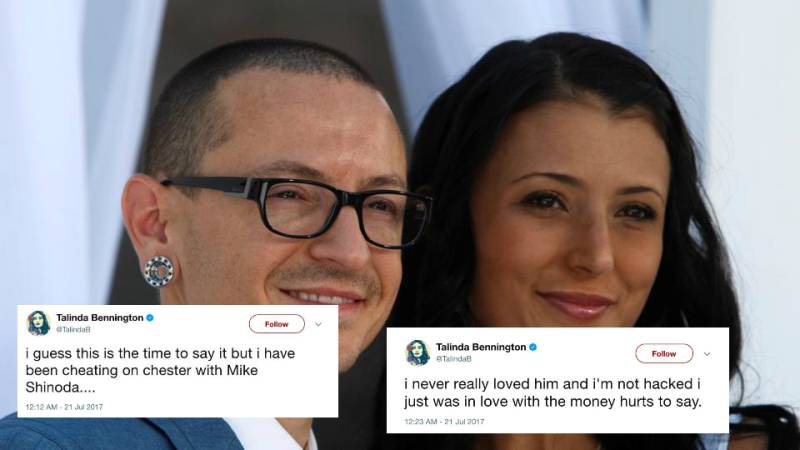 Hours after Linkin Park frontman Chester Bennington was found dead in an apparent suicide, his wife Talinda's Twitter account appeared to have been hacked with several distasteful tweets sent out.

The shocking posts made allegations that she 'never really loved' her husband Chester and that she had been 'cheating' on him.

The tweets, now deleted, claimed an affair with Linkin Park member Mike Shinoda and that Talinda Bennington was 'glad' her husband had killed himself.

A further sick message said 'no one cared' about the singer's death. The hacked tweets have now been removed from the account.

Soon after being poster, the messages were removed, but only after dozens of fans took screen shots and retweeted them hundreds of times

Someone hacked Talinda's Twitter earlier.. The shit they were posting. I'm just without words that people can be like that..

Really sick/cruel that someone would think to hack Chester Bennington's wife's page and tweet that. Just doesn't make any sense.

Some Tweeters seemed unsure about the authenticity of the messages, thinking they could be real, while the majority criticised the hacker for their disgusting behaviour.