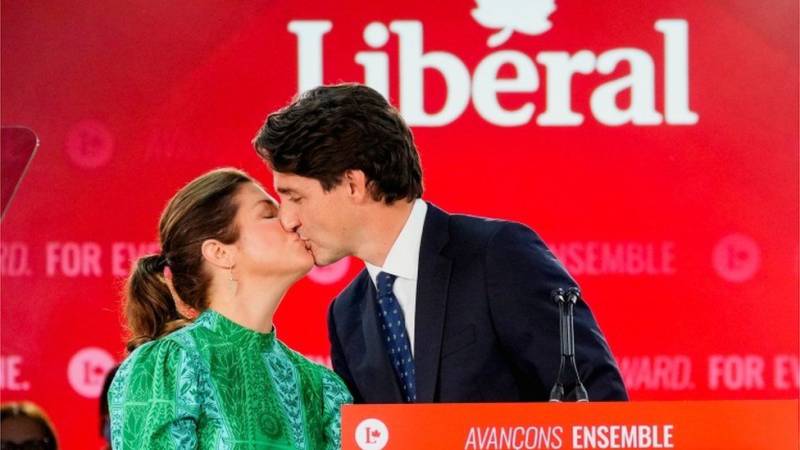 This is Trudeau's third federal election win, but his critics say the poll was a waste of time.

The Liberals are projected to win 158 seats, short of the 170 seats needed for the majority Trudeau was seeking with his early election call.

The Conservatives have held onto their main opposition status and are expected to win about 122 seats.

Trudeau told supporters in Montreal in the early hours of Tuesday morning: "There are still votes to be counted but what we've seen tonight is millions of Canadians have chosen a progressive plan."

"You elected a government that will fight for you and deliver for you," he said.

A failed gamble for Trudeau

The election, which took place during a fourth pandemic wave in Canada, was the most expensive in the country's history, costing some C$600m ($470m; £344m).

The projected results suggest a parliament strikingly similar to the one elected just two years ago in 2019.

The snap election call, sending Canadians to the polls for the second time in two years, was widely seen as a bid by Trudeau to secure a majority government and he struggled to explain why a campaign was necessary. Conservative leader Erin O'Toole suggested it was a waste of time and money.

"Canadians sent him back with another minority at a cost of $600m and deeper divisions in our great country", he told reporters.

Trudeau maintained that the election gave the incoming government a clear mandate in moving forward.

But over the course of the campaign, he struggled to convince voters of the need for an election, which also coincided with rising Covid-19 caseloads due to the Delta variant.

Separately he was also heckled by anti-vaccine protesters on the campaign trail, with some shouting they would refuse the Covid jab.

While questions will inevitably be raised about Mr Trudeau's political future, Liberal MP Pablo Rodriguez told journalists early in the evening that no matter the outcome, he had "100% confidence" in him as Liberal Party leader.

"And all the members of the party do as well," he said.

How did other candidates do?

The country's left-wing New Democrats (NDP), which ran on a "tax the ultra-rich" message with leader Jagmeet Singh trying to tap into progressive voters frustrated with the Liberals, looks to have picked up a small number of seats.

Vote counts will continue to trickle in over the coming days as elections officials tally the roughly one million mail-in ballots cast this election, and current seat tallies are still to be finalised.