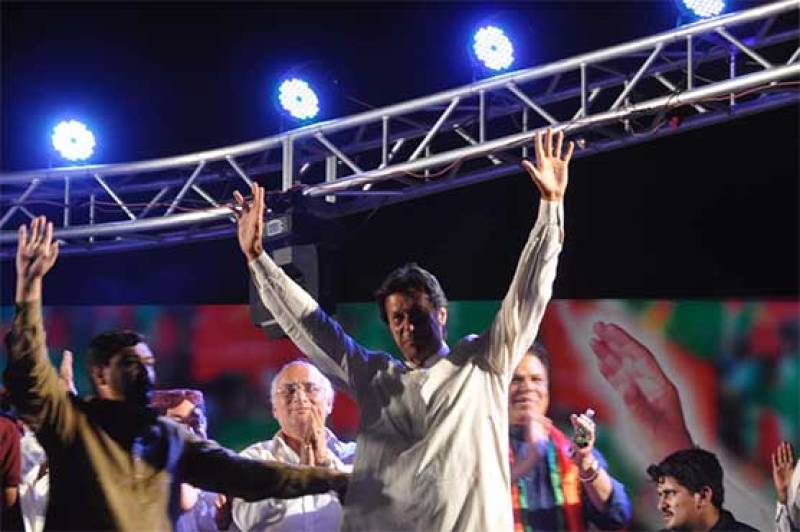 Addressing a massive public meeting in Dadu district of Sindh, Imran Khan stated that Prime Minister Nawaz Sharif will have to appear before a Joint Investigation Team (JIT) like Uzair Baloch, the head of the banned Peoples Aman Committee (PAC).

He said that he would gather people around the single point that a criminal cannot remain the prime minister of this country.

“I'm now free from the Panama Leaks case because Sharif family has to present themselves before the JIT like Uzair Baloch for their corruption,” he said. "I know Nawaz Sharif for over 30 years and I know how he made his money."

He also took a dig at PPP President Asif Ali Zardari. "The party that a great leader like Zulfiqar Ali Bhutto created has now been reduced to a regional party by Asif Zardari," he said. "Zardari can't even step out into the public because everyone knows him as a dacoit." He added.

“Conditions in Sindh are the worst among all provinces and I promise that I will only work for your welfare,” he reiterated. “I'll now pay all my attention to the people of both urban and rural Sindh,” he said.

Urging people to support his party in ousting a ‘corrupt prime minister’, the PTI chief Imran Khan has announced that the movement to demand the resignation of Prime Minister Nawaz Sharif in the light of the Supreme Court’s judgment in Panamagate case has been started.

“Come to Islamabad for PTI’s April 28 rally, not for me but to save your country; to defeat this corrupt cabal and for the truth,” Imran said. Imran said on April 28 the party will compel the prime minister to resign. “I will disclose my strategy for building up pressure on the PM in the public meeting,” he said.

Imran also ranked the PPP’s Co-chairman Asif Ali Zardari over the coals, describing him as the most corrupt politician. ”Zardari listen, my war against Nawaz Sharif is going on but now I am coming after you. I will come to Sindh, will go to every part of the province.” -Online