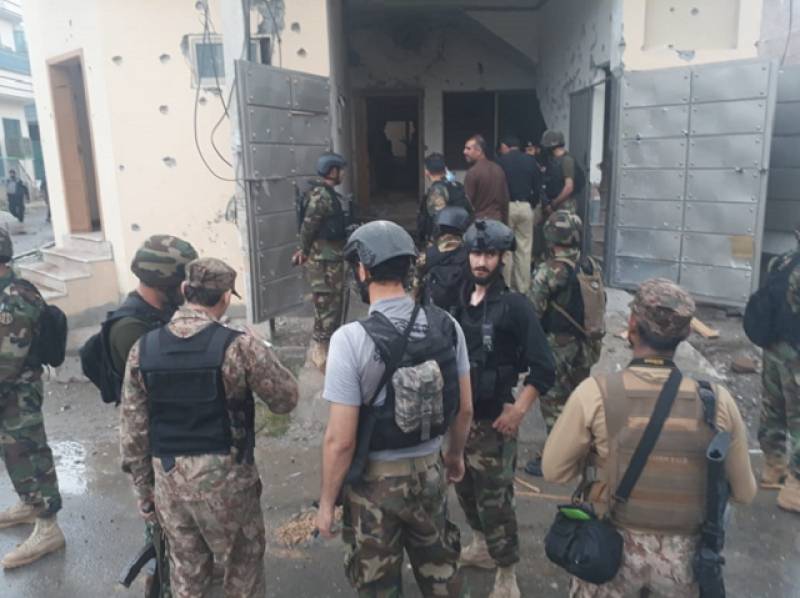 PESHAWAR - The terrorists who were killed in an operation at Phase VII of Hayatabad Township were running a full-fledged network and engaged in planning for future activities of subversion.

Flanked by officials of Counter Terrorism Department (CTD), the CCPO Peshawar said according to forensic tests the killed gang members were involved in a number of terrorist attacks carried out in Hayatabad township including an attack on Judge of Peshawar High Court (PHC), Justice Muhammad Ayub Khan Marwat.

The forensic tests proved that the arms used in the attack on PHC judge and those sized from the house where the terrorists were taking refuge were same, the CCPO added.

He also shared with journalists some telephonic transcripts retrieved from the mobile phones of killed terrorists which indicated that they were planning for more terrorist attacks and searching for targets.

In one communication, the terrorists were found racking PTI Youth Convention in Hayatabad attended by the provincial ministers.

The last terrorist, Saeed alias Babu was arrested alive in injured condition and was getting treatment, Police chief added.

Disclosing other details, the CCPO said group commander, Amjad Ali was the resident of Khyber Agency and had traveled to Afghanistan five times. He was also deported from Greece in 2019.

The suicide bomber, Imran Afghani had recently arrived from Afghanistan on his passport on March 22. 2019.

The explosive seized from the house was of high quality and weighted about 60 kg packed in an IED and a booby trape.

The CCPO said the explosive exploded during the bid of BDU to defuse which also resulted in the destruction of the house.

Qazi Jamil also informed the terrorists obtained house on rent through forge documents by using CNICs of some other people.

The CCPO said intelligence agencies were keeping a vigil on the group and after getting credible evidences raided the house which resulted in exchange of firing and a full fledge operation resulting in martyrdom of two security officials and killing of five terrorists.

The CCPO also rejected the claims that killed persons were not terrorists and were trapped by Police. He said they kept on retaliating fire with security forces for 17 longs hours.

The relatives of the group members were also invited and request were made through them to surrender but they kept on retaliating.

The CCPO said security forces wanted to arrest group members alive so that maximum information could be obtained from them, but retaliation and exchange of firing resulted in their killing.