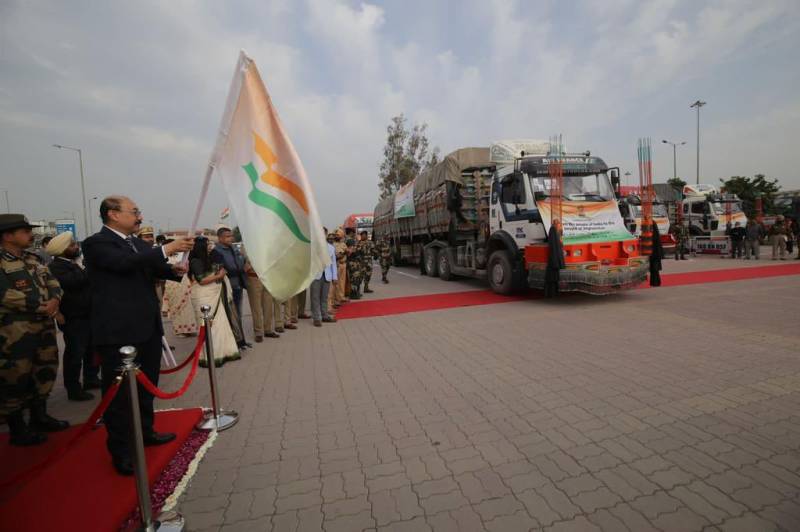 NEW DELHI – India too has joined the efforts to avert the humanitarian crisis in the war-ravaged Afghanistan.

On Tuesday, Indian Foreign Secretary Harsh Shringla flagged off a convoy of 50 trucks carrying 2500 MT of wheat as humanitarian aid for Afghanistan at the India-Pakistan integrated check post (ICP). This was the first convoy of about 1000 truckloads which will head for Jalalabad over the next few weeks.

This wheat is expected to be sent across Afghanistan to help people deal with the crisis caused by food shortages and an economic collapse after the Taliban takeover of Kabul. This humanitarian aid was sent “in response to appeals made by the United Nations for humanitarian assistance to Afghanistan,” the Ministry of External Affairs said.

Traders and truckers in Amritsar also welcomed the trans-shipment, which is taking place after being suspended for nearly three years, and expressed the hope that the opening for Afghan aid would also lead to a reopening of India and Pakistan trade, whose closure has caused massive economic losses in the border town.

“The shipment is part of the commitment made by the Government of India to supply 50,000 MT of wheat for the people of Afghanistan. The wheat assistance will be delivered in multiple consignments and will be handed over to the United Nations World Food Program (WFP) in Jalalabad, Afghanistan,” an MEA statement said.

The statement made no reference to the Taliban regime, which India and other countries do not recognise.

An important milestone in India’s humanitarian assistance to the Afghan people.

World Food Program Country Director Bishaw Parajuli, who had helped complete the negotiations with India, and Afghan Ambassador Farid Mamundzay were also present at the ceremony.

According to officials, the wheat procured by the Food Corporation of India (FCI) has been specially “double bagged” to protect it from contamination and moisture along the 500km journey from Attari to Jalalabad, and then to other centres for distribution.