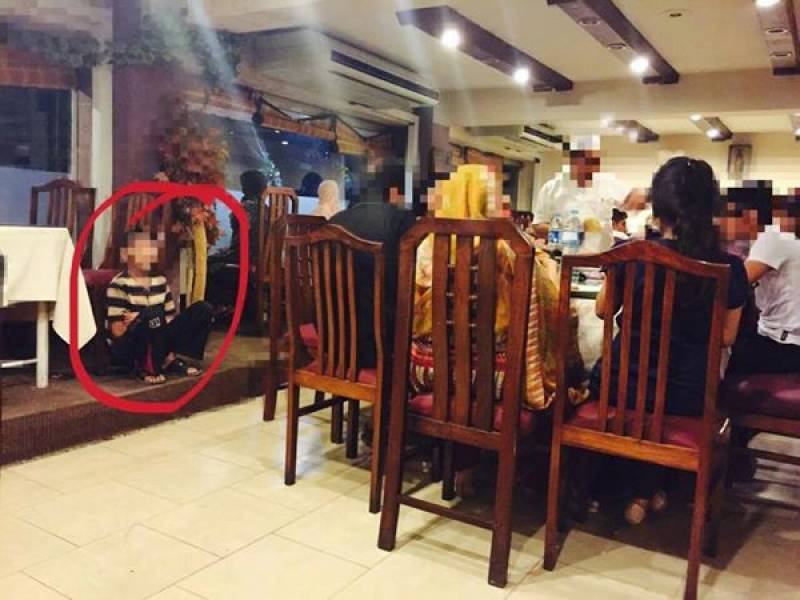 PAKISTAN (Web Desk) – An anonymous photographer recently shared photos showing inhuman treatment of domestic servants on social media. The photos show a family of 9-10 people having dinner in a restaurant but their servants was not allowed to even see the food.

In one photograph a servant boy is seen sitting on the floor. According to the anonymous photographer, this boy was not allowed to sit on the chair. Later on he was told to turn his face towards the wall so that he may not see them eating the luxurious food. The boy was not offered food according to photographer.

In another picture two other maids who were hardly 8-10 years old can be seen. Both were forced to sit perfectly still facing the wall. They were not allowed to move their hands even, photographer added.

In last picture a servant girl who was hardly around five years old was sitting underneath the table and was eating the leftovers "as if she was a dog or any other animal", he noted. He also added that the servant kid was sitting in family member’s feet and was sweating badly.

The faces of family and servants have been blurred by page admins, much to the anger of Facebook users who want them to be named and shamed. However this is not the first time such photos have gone viral. Every few months a photo pops up on Facebook showing such abuse of domestic help but no action has ever been taken by anyone despite laws against child labor and abuse.

In Pakistan, child labor and domestic help go hand in hand. Many of these children are abused physically and mentally and this remains one of the most overlooked and disturbing aspects of our society.