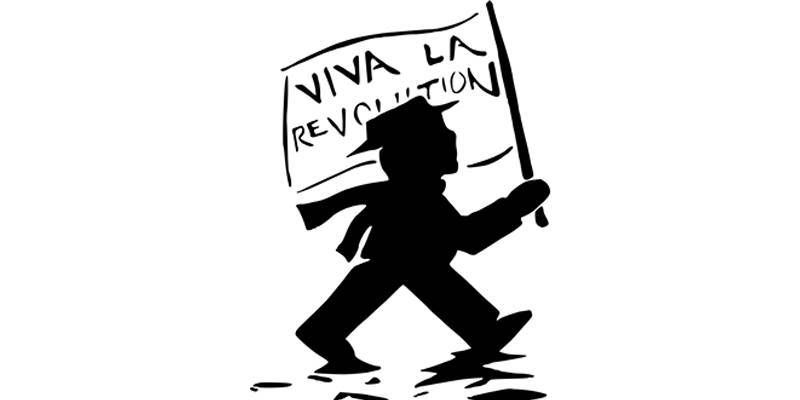 Last week, friends in Islamabad witnessed, walked and crawled through an emerging revolution. Some ungrateful ones, lacking foresight, cursed the traffic jams caused by the sit-in. They don’t have an eye or stomach for revolution. They must know that a sit-in doesn’t cause traffic jams, a road that tries to run through a sit-in does. They should at least learn to curse rightly, even if they can’t appreciate a revolution in the making. This sit-in is part of the revolutionary move PTI-PAT started in 2014. It doesn’t make the list of 10 of the last 10 years. It may well be the 11th revolution, but it’s still work-in-progress.

By 2025, we may have as many revolutions as there are amendments to the 1973 Constitution. As after 25 amendments to any Constitution, there is nothing left of the original legislation, after 25 revolutions, nothing will remain of the old Pakistan. Great news indeed; a New Pakistan nevertheless!

There is no priority order in the list of 10 revolutions, just like there is no order in or after a revolution.

Mobile phone revolution is perhaps the most obvious. If mobile-phone-use (over 70%), SIMs (at least five for every mobile user), and spending time on mobile phones were indicators of prosperity, Pakistan would top the list of prosperous nations. For Punjabis, cell phones are the new – and a bit decent – fiddlers. No, no; don’t go below the belt; I imply fiddling with their moustaches and the area around.

Literacy revolution is a startling achievement. The officials say our literacy rate is 53%, but 90% can SMS in roman letters. The official stance of literacy ki aesi ki tesi – sorry, no translation of this expression in other languages. It’s Punjabi’s revenge from Urdu. Every revolution has certain sweet acts of revenge, you know.

Judicial revolution is nascent and sprang 10 years ago from a long slumber of judicial submission. Quite like those heavy metal songs that have more sound, less voice and far fewer lyrics, this revolution has an odd blend of projection vs. delivery vs. impact of justice. In the last 8 years, 8 cases took 80% time, and 40000 cases didn’t get any, for 20% of the remaining time went to watching the media coverage of those 8 cases.

Media Revolution is the second most obvious that changed the definition of “national”. Now, sensational is the new national in Pakistan. Anything not sensational doesn’t exist for media, doesn’t attract us.

Population revolution is my favourite. What other nations took centuries to do, we did in decades. On this, even rabbits can’t beat us. We can gauge its success from the fact that even lesbians and gays in Pakistan have at least two kids each, and not adopted ones. Can anyone beat that! No, no one can.

Road revolution is unequally dispersed in Pakistan. It seems roads also procreate, and more so in urban centres. That’s why road revolution is most visible in Lahore and Karachi. Pakistanis from mountainous, rural and far-flung areas come to these metropolitans to see the trees and fruits of this revolution.

Poverty revolution is also quite a unique feat. Several million became rich in the name of poverty in Pakistan. I guess when others said poverty alleviation, our policymakers heard poverty elevation.

Housing Revolution is quite a miracle. Some revolutions inadvertently end up producing classes; ours led to housing societies that ensured classes continued.

The Army contributed to this revolution ingeniously with ingenious use of Iqbal’s revolutionary verse: Jis khaet se dehqan ko muyassar na ho rozi, uss khet pe ik naya DHA bana do (A field that fails to feed a farmer, must be converted to a DHA).

The sexual revolution is pervasive like pollution in Lahore. Despite being a taboo, it’s practised far more than it’s mentioned. In the West, they display it openly. We play, but don’t let anyone display. Others have gays and bisexuals; we have try-sexuals: We try whatever, whenever, and as much as we can, when we can!

Load-shedding revolution is the oddest one. It has become so much a part of our lives that we start having withdrawal symptoms when there is no power outage.

Pakistan is the only nuclear power which doesn’t have electrical power. That is because we could have either produced revolutions or electricity. The choice was obvious and clear. May you have many more.