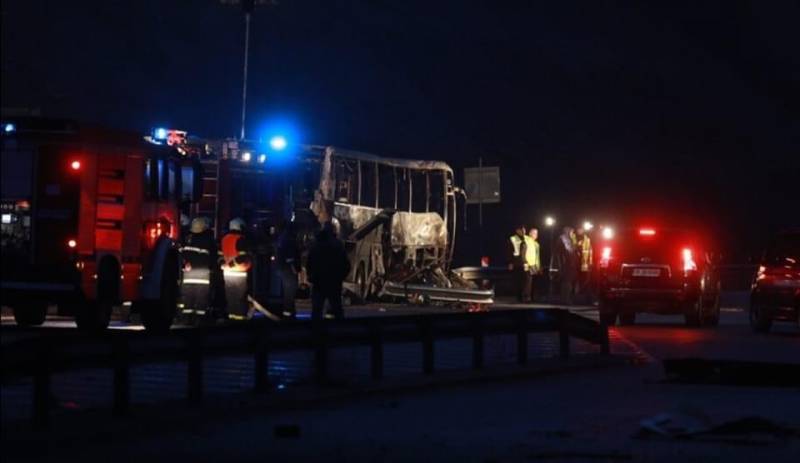 BOSNEK, Bulgaria -- North Macedonia called for three days of national mourning after a tourist bus carrying its citizens caught fire and crashed in Bulgaria on Tuesday, killing 46 people in Europe’s deadliest road accident in the past decade.

Although the cause has yet to be determined, officials believe the bus crashed into the guardrails and caught fire while returning from Istanbul in Turkey to Skopje in North Macedonia.

Those who died trapped in the burning bus — including four-year-old twins, according to media reports — were from North Macedonia, prompting the government to declare three days of mourning where the country’s flag will be flown at half-mast.

Bulgaria has also declared a day of mourning on Wednesday.

Only four men and three women, including a 16-year-old, survived the crash by breaking one of the windows and jumping to safety, according to officials.

Some of the victims’ families rushed from North Macedonia to Sofia but were denied entry at the hospital where the victims were being treated.

“I only know that my uncle is alive and well. But I know nothing so far about his wife and son... The doctors say that if they’re not here they are probably among the dead,” Yousouf Bajazidovski told the media outside the hospital.

“We ask each other, we ask doctors, we ask the North Macedonia embassy in Sofia, but no one can tell us anything more.”

In North Macedonia, one man told the Sloboden Pecat newspaper that 10 of his relatives had died.

“I lost my whole family in the blaze,” he said.

Media in North Macedonia reported that several of the dead were from a Skopje primary school, where all classes were stopped.

The accident happened after midnight on a highway about 40 kilometers (26 miles) from Sofia, near the village of Bosnek.

Many of the dead were between 20 and 30 years old, officials said.

Local media said the bus was registered with the Besa Trans tourist agency, which organizes sightseeing and shopping tours to Istanbul.

The tour bus company did not immediately respond when contacted by AFP for comment.

Images showed the carcass of the charred bus after it broke through the highway’s central guardrail.

Bulgaria’s interim Prime Minister Stefan Yanev said a probe into the accident had been launched, dismissing suggestions that road conditions were to blame.

Deputy chief prosecutor Borislav Sarafov said they were still investigating “if it was a technical fault of the vehicle or a human error that caused the crash.”

“He explained that they were sleeping in the bus when an explosion was heard. They succeeded in breaking one of the windows and saved a few people. Unfortunately, the rest did not succeed,” he said.

Bulgarian national police chief Stanimir Stanev said the bus driver died “immediately so there was no one able to open the doors.”