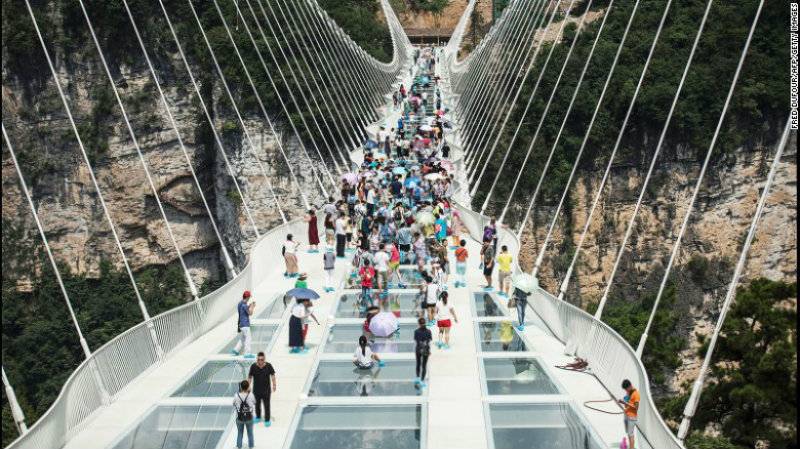 BEIJING (Web Desk) - China just added a bunch of new claims to its planet-beating achievements -- this time its the world's sweatiest palms, the trembliest knees and the most-flipped stomachs.

Thousands of visitors have been steeling themselves to walk across the newly opened structure that spans the Zhangjiajie Grand Canyon in Hunan Province, CNN reported.

The six-meter wide bridge stretches 430 meters over a 300-meter-deep valley between two cliffs in the beautiful Zhangjiajie Park, said to have inspired the scenery for the sci-fi movie "Avatar."

Designed by Israeli architect Haim Dotan, the glass-bottomed bridge will also feature the world's highest bungee jump and serve as a runway for fashion shows.

Visitors have been reportedly lining up for hours to cross the bridge, but although it can take 800 people at a time, access is being restricted to a maximum 8,000 a day.

Authorities have been working hard to stress the bridge's safety credentials, inviting journalists to try to smash their way through its thickened glass.

In another demonstration, a car was driven over the structure.