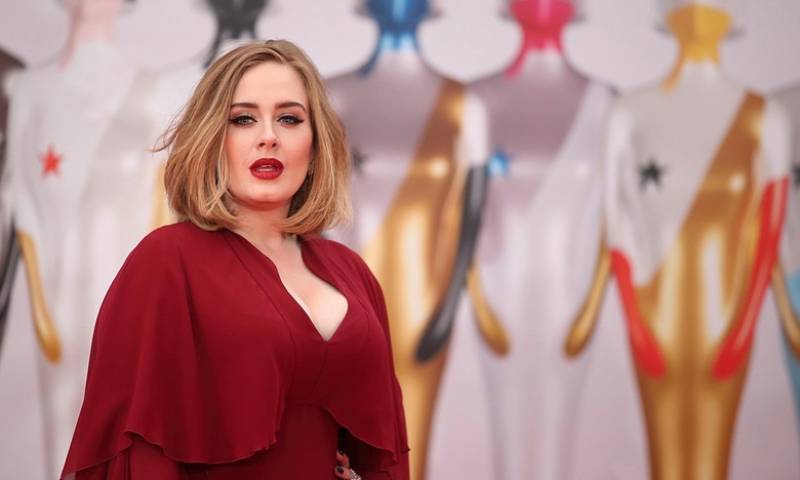 LONDON (Web Desk) - Adele was the big triumph story at the 2016 Brit Awards, picking up a whopping four honors.

She took home the awards for Best Album, Best Female Solo Artist, Best Single and the Global Success Award. The megastar also took to the stage for a stirring rendition of her track When We Were Young to close the event, RTE Ten Entertainment reported.

This was the second time Adele has won the Best British Female Artist award, singer also took the opportunity to voice her support for Kesha.

A host of stars graced the red carpet for the ceremony at the O2 Arena in London, including pop icons Rihanna, Kylie Minogue as well as One Direction members Louis Tomlinson and Liam Payne.

Justin Bieber treated the crowd to a pared-back version of his hit single Love Yourself, accompanied just by an acoustic guitarist, before breaking into an all-together more dramatic rendition of Sorry surrounded by backing dancers.

Kylie Minogue presented the Best British Male Solo Artist award to James Bay, who thanked his family for being with him at the awards, saying "this is insane".

The Best British Band gong was presented by Star Trek and Mission Impossible star Simon Pegg to Coldplay. This is the fourth time they've won the award, having first picked it up a whopping fifteen years ago in 2001.

Nick Grimshaw and Cheryl presented the British Breakthrough Act to Catfish and The Bottleman who beat out competition from James Bay, Jess Glynne, Wolf Alice and Years & Years.est International Female went to Bjork, who was unable to attend the ceremony to pick up her award, but accepted it via a video message, in which she said she was "honoured" to have the title.

The awards show featured a special tribute to David Bowie, who passed away in January. He won the Brit award for Best British Male twice - in 1984 and 2014 - and received the Outstanding Contribution to British Music award in 1996.

British Artist Video of the Year went to One Direction for Drag Me Down. Although the band are currently on a much-publicised hiatus, Louis Tomlinson and Liam Payne took to the stage to accept the gong.