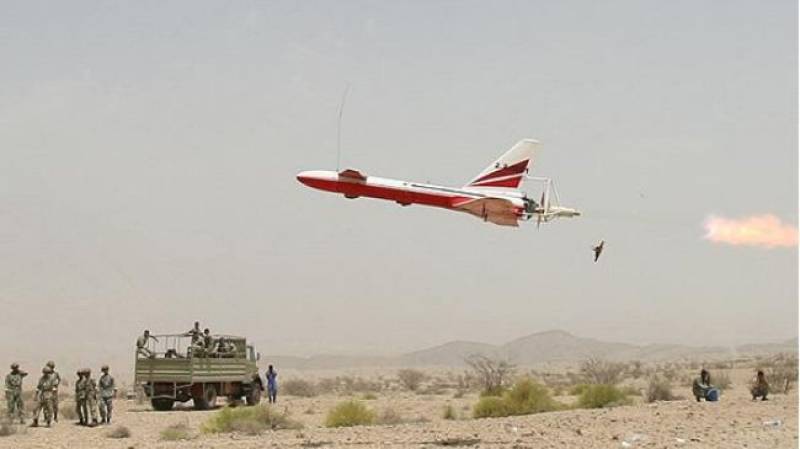 A JF-17 fighter jet of Pakistan Air Force, reportedly equipped with a third-generation, short-range air-to-air PL-5EII missile, shot down an Iranian spy drone this week. The drone was operating illegally inside Pakistani airspace. This was not the first Iranian drone secretly flying missions inside Pakistan. In a revelation that would surprise Pakistan’s political and strategic communities, the Islamic Revolutionary Guard Corp, or IRGC, which likely owns this drone, has been flying missions over Balochistan since March this year. Iranian drones have been secretly operating in Balochistan for three months now. And despite repeated Pakistani requests for coordination on the Pakistan-Iran border, the Iranian authorities did not inform Pakistan they intend to fly surveillance drones at the international border, let alone inside Pakistani territory.

Pakistan’s decision to shoot down the spy plane came as a shock to IRGC. Roughly a few hours apart, another Iranian drone was shot down in Syria. This must have been noticed at the highest levels in Iran, though Tehran kept silent on both incidents. It is a long stretch from Syria to Pakistan, but this is what the IRGC does, thriving on operations outside Iran in several neighboring countries across the region.

The Iranian decision to operate spy drones inside Pakistan was taken much before the April 26 attack inside Iran that killed ten border guards, which Tehran blamed on Pakistan. No evidence yet has been shared to suggest the attack, at Mirjaveh town, was mounted from Pakistani territory. But there is ample evidence the attackers, from the terrorist Jaish al Adl group, are likely Iranian dissidents who have been active in Sistan Province for years because of long periods of turmoil in Iranian politics. On June 14, Iranian militants mounted a gun battle with security forces in residential areas of Chabahar. The news was largely downplayed in the Iranian media, with smaller news outlets covering it. Iran did not blame any outside power for this attack.

Despite several attempts, Iran and Pakistan have failed to hold a flag staff meeting at the border. On May 27, after Iranian shelling killed a Pakistani citizen, Pakistan asked for the meeting on May 28, then 29, and then several times after that. The Iranian authorities delayed responding to the requests. Finally, they requested for a meeting in Tehran instead of flag meeting at the border. Islamabad did not object and accepted the Iranian demand. Now the Ministry of Foreign Affairs in Islamabad is coordinating with its Iranian counterpart. Pakistan border and security officials in Balochistan are likely to travel to Tehran for the meeting once Tehran gives the green signal.

It is not clear yet how the Iranian authorities will justify using spy drones inside Pakistan, or if they will accept responsibility for violating Pakistani sovereignty. It is possible that Iranian government and border authorities did not intentionally conceal the information on drone use from Pakistan. It is likely they did not know in the first place. The IRGC may not have shared all information regarding its operations in Pakistan with other departments of the Iranian government that deal with Islamabad. The IRGC is a force that operates outside the control of Iran Armed Forces, which were sidelined after 1979. This new force was created to protect the religious government in Tehran and promote its interests and ideology. The Iranian military was apparently not fully trusted to do so. Interestingly, Pakistan enjoyed close and robust ties with Iran’s professional military before it was sidelined. The IRGC reports directly to Supreme Leader Ali Khamenei, bypassing both President Hassan Rouhani and the Iran Army.

The list of Iranian actions detrimental to Pakistani interests is expanding fast, and is eroding the long history of close cooperation.

Apart from blaming Pakistan on multiple occasions for its internal political problems in the east and the south, Tehran recently tried to interfere in Pakistan foreign policy decisions, particularly in Islamabad’s long-standing policy of maintaining close diplomatic and military ties to Arab countries since Independence. Pakistani officials were particularly incensed at Iranian attempts to manipulate Pakistani public opinion on the question of Islamic Military Alliance to Fight Terrorism (IMAFT). Tehran is militarily involved in several countries in the Middle East but wants Pakistan to isolate itself in the region. There is also evidence of Iranian links to a campaign of defamation against former Pakistan army chief Gen. Raheel Sharif, who oversaw the busting of India’s anti-Pakistan terror network operating from Iran. The idea that Tehran can dictate policy to Islamabad surprised many in Pakistan, and was a departure from the policy of mutual respect and non-interference in each other’s affairs that both countries pursued after the coup in Iran in 1979.

Apart from the use of spy drones in Pakistan, Iran took a major step when it allowed India to run an anti-Pakistan intelligence operation from Chabahar, the port city where India is making large investments to lessen Afghanistan’s reliance on Pakistani ports. The Iranian city was used by Indian intelligence officers to plot sectarian attacks in Pakistan on Pakistani Shia Muslim citizens, according to the second confessional statement by Indian naval commander Kulbhushan Jhadav. Pakistan also arrested two gangsters who were used for espionage on coastal military installations in Pakistan. They carried Iranian passports.

Another key reason for recent Iran-Pakistan tensions are the steps Islamabad has taken to stop Iran from recruiting Pakistanis to fight in Syria. The IRGC is facing shortages in fighters as young Iranians refuse to join it in its foreign adventures. The supply of fighters from Pakistan was essential but has now become difficult.

In the interest of maintaining cordial relations with Tehran, Islamabad refrained from making public the results of the Jhadav probe. The information that Islamabad did not make public includes details on Pakistani demands for Iran to arrest accomplices of Jhadav in Iran, prevent their escape to India, and to give Pakistani investigators access to share the results of Iranian investigations with them.

Pakistani government circles are disturbed at reports that elements from terrorist organizations like BLA and BLF have recently found sanctuaries in Iran. Early this year, there were reports that BLF terror commander Dr. Allah Nazar moved to a sanctuary in southern Iran, close to Chabahar. For Pakistan, years of working with Kabul to end these sanctuaries in Afghanistan only to see them move to Iran is a matter of concern.

Iran’s IRGC is a paranoid ideological force. It has suspicions that Pakistan’s Balochistan province is being used by Saudi Arabia and the United Arab Emirates for operations inside Iran. This is a wild theory backed by no evidence. Pakistan did not support anti-Iran efforts during the Iran-Iraq war in 1980s, when all of Islamabad’s allies were on one side. There is no reason for Pakistan to do so now. Additionally, UAE and Gulf states are among Iran’s top trading partners and many Iranians live in the Gulf. Tehran can raise these suspicions directly with KSA and UAE and resolve them through diplomatic engagement.

Iran Foreign Minister Javad Zarif, a soft-spoken university professor who now runs Tehran foreign policy, has tried to resolve these issues. But it is apparent that, despite the rise in his influence after the Iran nuclear deal, he is finding it difficult to wrest control of Iran’s Pakistan policy from the hardline IRGC. This week, Zarif’s ministry, and President Rouhani’s government, struggled with the domestic dispute over who takes the credit for Iran’s missile attacks into Syria. After initially taking credit, Rouhani government had to give in to IRGC, whose media outlets insisted the credit belongs to the religious force.

Despite the current tensions, relations between Islamabad and Tehran have seen better days post-1979. Pakistan helped Iran in 2010 arrest a terrorist leader, Abdolmalek Rigi, an Iranian who headed the Jundullah terror group in southern Iran. It is believed this group was created in Afghanistan after 2001. During Iran’s war with Iraq, Pakistan broke away from almost all its allies who supported Baghdad in the war. Pakistan allowed Iran full use of Karachi port for all its civilian and military needs when Iranian ports were exposed during the war. Iran, under the Pahlavi dynasty, was the first country to establish diplomatic ties with Pakistan after Independence in 1947. Islamabad reciprocated this by becoming the first country to recognize the religious government in Tehran after 1979.

The shooting down of the Iranian drone is a major development. Pakistan wants good relations with Iran because its plate is already full dealing with Afghanistan unrest, Kashmir, and India. The drone episode renews the debate in Pakistan on how to deal with Iran’s expanding footprint in the region.