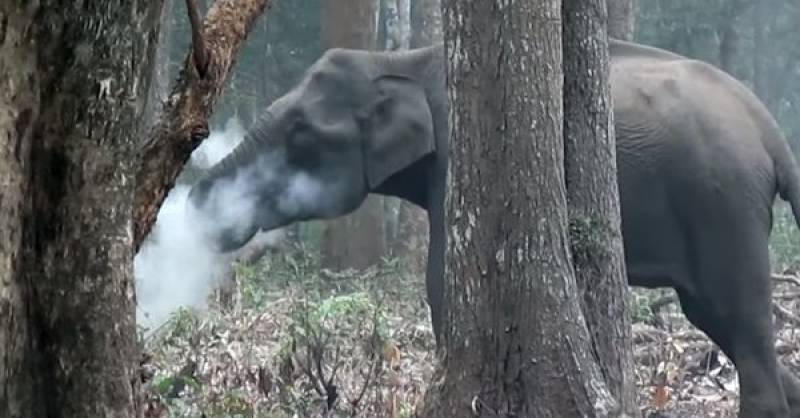 BENGALURU, Karnataka – Scientists in India have been left baffled by a wild elephant caught on camera blowing out plumes of smoke while consuming smouldering lumps of charcoal.

A video shared by the Wildlife Conservation Society (WCS) shows the mammal picking up lumps of charcoal with its trunk, placing the coal in its mouth, and exhaling a large cloud of smoke in Nagarahole National Park.

Scientists have theorised it may have been trying to eat the wood for medicinal reasons.

“I believe the elephant may have been trying to ingest wood charcoal,” said Dr Varun Goswami, WCS India scientist and elephant biologist.

“She appeared to be picking up pieces from the forest floor, blowing away the ash that came along with it, and consuming the rest.”

According to the WCS charcoal has toxin-binding properties that may provide medicinal value.

The charred lumps of wood can also serve as a laxative to the pachyderms who are able to consume it in the wild after forest fires and lightning strikes.

Nagahrole National Park in the south east of India is home to threatened species including Asian elephants, Indian bison and tigers.