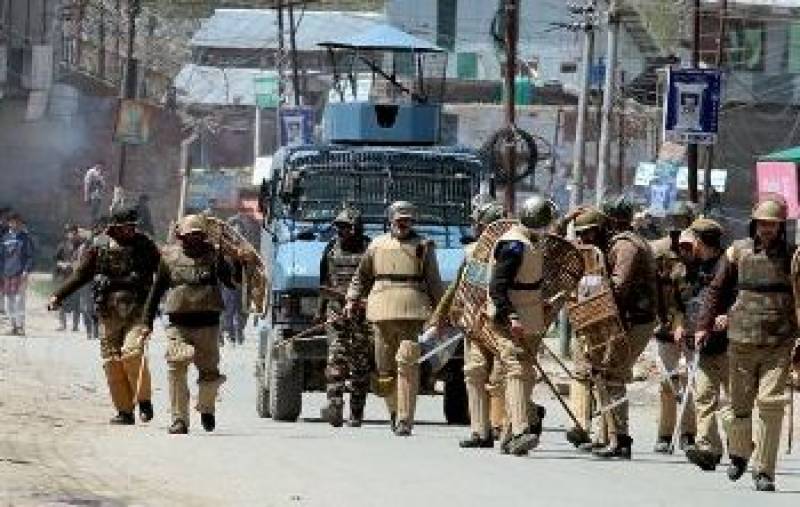 SRINAGAR (Web Desk) - In occupied Kashmir, thousands of people attended the funeral prayers of a youth in Bandipora today and held forceful demonstrations against the killing.

The youth Waseem Ahmad Lone, was martyred after Indian Army personnel fired upon the men and women who were busy in paddy fields at Nadihal in Rafiabad area of the district yesterday.

The dead body of martyred Wasim was wrapped in Pakistani flag.

With the death of Waseem Lone, the figure of civilians killed by Indian forces during the ongoing Kashmir Intifada has risen to 106.

The All Parties Hurriyet Conference Chairman, Syed Ali Gilani, and other Hurriyet leaders in their statements strongly denounced the cold blooded murder of the youth.

In a statement, Syed Ali Gilani said tall claims of restraint by Indian forces are aimed at befooling the common people and the ltet incident testifies that their lust for blood has not ended yet.

Meanwhile, several people were injured when Indian police and troops used brute force against protesters in Anantng- Islamabad and other areas.

The authorities continued to impose curfew and other restrictions in Srinagar, Handwara and other areas.

People observed complete shutdown across the Kashmir Valley on the 78th consecutive day today, to protest against the killing spree unleashed by Indian forces in the territory.