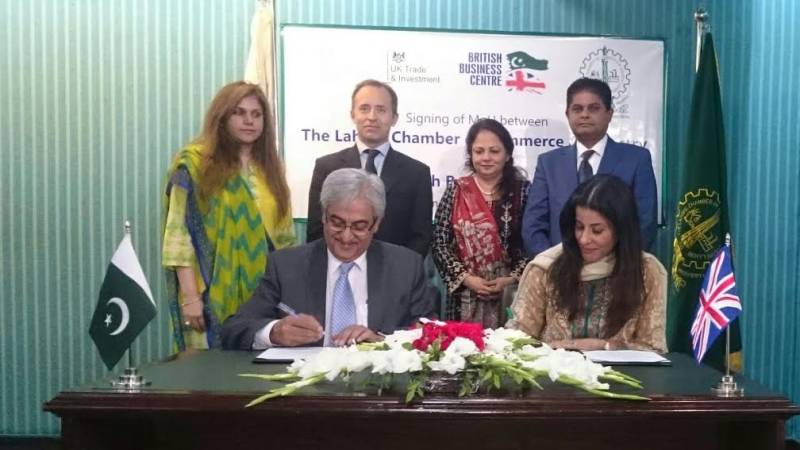 Basic objective of the Memorandum of Understanding (MoU) is to encourage, promote and facilitate effective cooperation in the areas of trade, investment, technology and related economic and industrial activities by establishing effective communication between member companies of both the organizations with particular reference to the private sector.

She said that the MoU would help improve collaboration between the two organizations, and the BBC would give the companies of UK and Pakistan a cost-effective, in-country physical resource to facilitate quick access to information and expertise necessary to achieve business success.

"It fulfils the commitment, given by Prime Minister Cameron to Prime Minister Nawaz Sharif, that the United Kingdom Government with the assistance of the government of Pakistan, will establish a new body in Pakistan to boost bilateral trade and investment between our two countries," he maintained.

He said the Center would work throughout the country.

He said that British and Pakistani businesses should be working together here and thriving.

"It is a message I give here and one I give back in the UK. And this MoU is an important part of it. Through it, the British Business Center can assistance in opening up the opportunities available to a wide business and audience in the UK," he added.

While, Provincial Finance Minister Ayesha Gaus Pasha said that Pakistan was one of the biggest and emerging markets of Asia.

She said that Punjab was trillion plus economy and it had strong commercial, service and industrial sectors which had a lot of scope for the foreign investors.

She also welcomed the MoU between Lahore Chamber and British Business Center, saying that facilitation to businessmen would certainly give more strength to business ties between the two countries.

The LCCI Senior Vice President Almas Hyder said that this MOU was a result of close coordination between the LCCI and British High Commission.

He said that UK had always been a major trading partner of Pakistan. These facts clearly validated such a strong commercial ties between two countries that UK came at first place among the top export markets in the Europe for Pakistan. With regard to major importing countries to Pakistan from EU, UK takes the second position.

Almas Hyder said that it was good to witness upward trend in both exports and imports between Pakistan and UK.

He said that UK had been contributing a sufficient amount in net flow of foreign investment in Pakistan.

"We at present are facing number of challenges in attracting new Foreign Direct Investment. We want that UK based investors should consider Pakistan for investments. It goes without saying that you can play pivotal role in this regard."

The SVP said that Pakistan was awarded GSP plus status by European Union Commission which became effective in January 2014 till 2017 and they anticipated an increase in Pakistan's exports to EU roughly to dollar 2 billion per year but it did not happen.

"So we look up towards you to get greater access to European markets," he added.

The LCCI Vice President Nasir Saeed said that UK was considered second home for Pakistanis in the world.

There were many Pakistani students studying in UK based educational institutes.

"We really value to have scholarship programmes offered by UK government like UK Chevening scholarship. This also needs to be expanded allowing more students to go for higher studies. Last but not the least, we require to attain modern technology and the UK has earned great name in this connection and can play supporting role in transfer of certain technologies," he concluded.