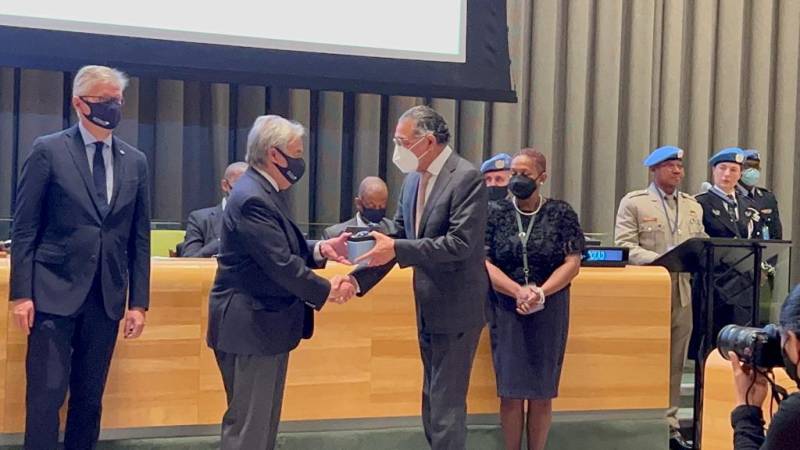 NEW YORK – Six Pakistani peacekeepers, who laid down their lives while serving in UN peacekeeping missions, were honoured with a prestigious medal awarded posthumously by United Nations.

A report of state broadcaster said the awards distribution ceremony was observed at the UN Headquarters in New York on Thursday.

UN Chief António Guterres addressed the ceremony and conferred the Dag Hammarskjöld Medal on 117 military, police and civilian peacekeepers who rendered their lives while serving under the UN flag last year.

6 Pakistanis are among 117 @UNPeacekeeping who were honoured posthumously on May 26 at a special ceremony marking the Int'l Day of @UN Peacekeepers.
Amb Munir Akram @PakistanPR_UN received the award for 🇵🇰 martyred Peacekeepers#PKDay #PeoplePeaceProgress pic.twitter.com/CdRgV8wEtA

Pakistan is among the longest-serving and largest contributors to UN peacekeeping. The South Asian country deeply values the vital role played by the ‘blue helmets’ in maintaining security and stability in many conflict-ridden areas around the world.

A country of nearly 221 million is said to be proud of its long-standing and consistent contribution to UN peacekeeping spanning over six decades.

Since 1960, over 200,000 of our men and women have served with honour and valour in 46 UN Missions in almost all continents of the world. Through their professionalism and dedication, our peacekeepers have always distinguished themselves in every Mission they have participated.

RAWALPINDI – An army helicopter was shot down in the Congo Republic that killed eight crew members including six ...

Pakistan’s first UN peacekeeping mission began in 1960 in Congo and so far more than 200,000 Pakistani soldiers have participated in 60 missions in 28 countries.

Women from the South Asian nation are also making their mark on peacekeeping missions as the country has achieved the UN goal of sending 15 percent female staff officers.