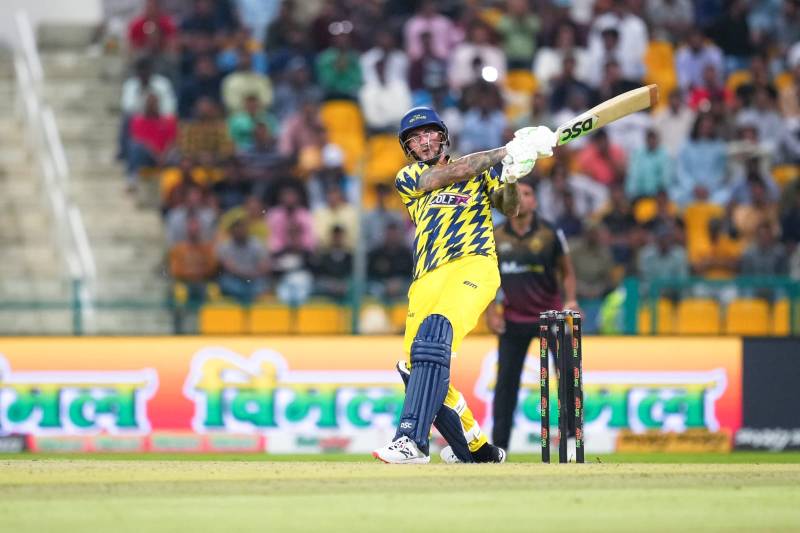 A stubborn opening partnership between Alex Hales and Chris Lynn lifted Team Abu Dhabi past Northern Warriors in the second match of the fourth day in the Abu Dhabi T10 at the Abu Dhabi Zayed Cricket Stadium on Saturday.  After Northern Warriors were restricted to 95 for 7, Alex Hales through a knock of 44 and Chris Lynn scoring 31 runs, put on a 69 runs partnership and recorded an eight wicket win with two balls to spare.

Northern Warriors had won the toss and elected to bat with openers Adam Lyth and Kennar Lewis on the prowl for quick runs. Lyth hit opening bowler Naveen Ul Haq for three boundaries but Peter Hatzoglou was miserly as usual. He gave away just one run in the second over. Andre Tye earned the first success of the innings by removing Kennar Lewis for 2 having him caught by Vince at covers.

Adil Rashid too prevented the batsmen from going for big hits and gave away only eight runs. Usman picked two boundaries off Amad Butt, but at the end of the half way mark, Northern Warriors could post only 35 for 1. The sixth over was a disastrous one for Northern Warriors as Adam Lyth got out to Hatzoglou for 22 caught by King at deep mid-wicket while playing a slog sweep. To make it worse, Usman Khan got run out to the next ball for 13.

Rovman Powell took up the challenge and hit Amad Butt’s first delivery of the seventh over for a six over third man followed by another six over deep square leg. Cheered by the Saturday crowd, Sherfane Rutherford too hit a six to the same region and take 21 runs off that over. When Tye bowled the eighth over, Powell hit his second delivery for a six to long-off. He also hit the fourth delivery for a boundary and fifth for another six. Tye ended Powell’s knock with the last ball of the over having him caught by Naveen for 29. His knock off 10 balls had one boundary and four sixes. Rutherford picked another six off Rashid to mid-wicket but fell two balls later caught by Alex Hales at long-off.

The chances of Northern Warriors going past the 100 run mark faded when Naveen, who bowled the last over, got Isuru Udana out for 2 and also had Abhimanyu Mithun caught by Vince at deep mid-wicket for 5. Northern Warriors  could thus muster only 95 for 7 in 10 overs.

Abu Dhabi, needing to score at a run rate of less than 10 an over, began with Alex Hales flicking the first ball from Mohammad Irfan to fine leg boundary but only seven runs came off that over. Chris Lyn made up for that hitting Gus Atkinson for a boundary and six to take 12 runs off the over. The battle between batsmen and bowlers to dominate each other continued with Abhimanyu Mithun letting Lynn score only a boundary in the third over and the rest as singles and a double.

The fact that Team Abu Dhabi hadn’t lost a wicket gave them the confidence and Hales hit Isuru Udana for two boundaries in the fourth over. Hales then hit the first ball of the fifth over from Irfan for a boundary to deep point.  He also hit the third delivery over mid-off. The partnership went past the 50-run mark through a six by Hales over long-on.

With only 41 runs were needed in the next 30 balls, Team Abu Dhabi began to the take control of the match. This 69 partnership ended in the seventh over when Rayad Emrit had Hales caught by Gus Atkinson for 44. His knock off 25 balls had six boundaries and two sixes. James Vince who joined Lynn accelerated the race to the target hitting Atkinson for three boundaries in the eight over.

Emrit bowled a good ninth over to delay Team Abu Dhabi’s victory giving away just seven runs. When one run was needed off the last three balls, Mithun ended Lynn’s fine knock of 31 by clean bowling him.  Brandon King walked in and hit the victory run off the fourth ball of the last over, wide of the mid-on fielder, for a boundary.

Player of the Match: Alex Hales