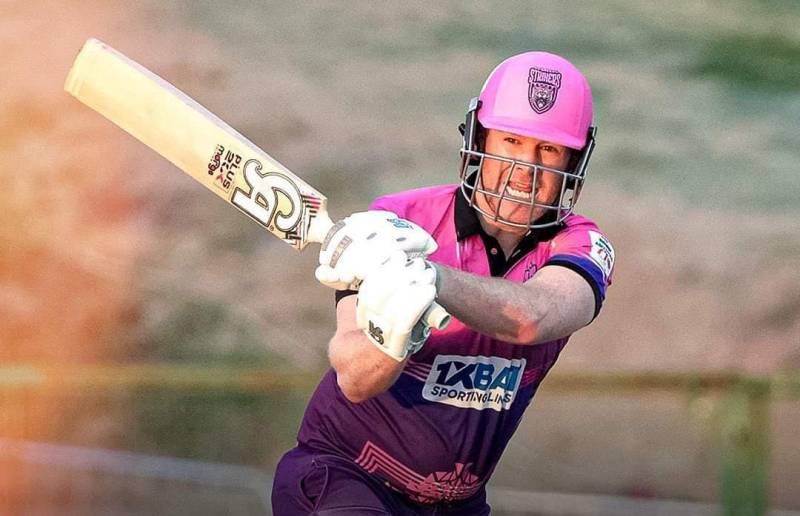 Eoin Morgan and Azam Khan steered New York Strikers to a well fought eight-wicket win over Deccan Gladiators off the last ball in the first match of the fourth day in the Abu Dhabi T10 at the Abu Dhabi Zayed Cricket Stadium on Saturday.

They put on an unbeaten 68 runs for the third wicket with Morgan scoring a defiant unbeaten 42 off 23 balls with five boundaries and a six.

Azam scored an unbeaten 26 off 20 balls with four boundaries. They carried their team from 42 for 2 in 3.3 overs to the target withstanding some tight bowling from the Deccan Gladiators’ bowlers.   Deccan Gladiators had posted 109 for 7 through Odean Smith’s 38 and Suresh Raina’s 28 runs.

The well fought contest began with Deccan Gladiators winning the toss and electing to bat.  They lost their opener Tom Kohler-Cadmore to the third ball of the first over from Akeal Hosein for a duck caught by Izharulhaq Naveed at short thirdman. Jason Roy hit the last ball of the first over for a boundary through the covers.  The second over was more eventful as Matiullah Khan took the prize wicket of the consistent Nicholas Pooran with the second ball. Pooran flicked into the hands of Mohammad Waseem for 7.

The fall of wickets continued in the next over when Hosein had Jason Roy caught behind by wicketkeeper Azam Khan for 5.

New York Strikers were on top removing three top batsman in just 2.3 overs. The mantle of taking the team to a good score fell on India’s experienced allrounder Suresh Raina and David Wiese, a consistent performer in franchise leagues. Wiese escaped being caught behind off Matiullah Khan in the fourth over as Azam failed to take the inside edge.

In the fifth over, Wiese hit Thompson for two consecutive sixes. But he hit the third delivery from Thomspon to Muhammad Waseem at mid-wicket. Thompson also got the prize wicket of Andre Russell caught exactly like the earlier dismissal. Mohammad Waseem took his third catch of the innings and this time again at mid-wicket. With half the side back in the dug-out by the half way mark for just 42 runs on board, New York Strikers wanted to go for the kill. But Muhammad Waseem bowled the sixth over giving away 12 runs.  Wahab Riaz was introduced for the seventh over to tighten things up but Odean Smith hit him for a six and a boundary. Twenty runs came off that over.

Thompson who bowled the eighth over continued to give nothing away till the fourth ball when Smith pulled him for a six. Raina too flicked him for another six off the last ball. When 17 runs came off that over, prospects of the score going beyond the 100 run mark became clear. Wahab Riaz tried hard to contain the run flow in his second over. Though Smith pulled him for a boundary, with the fifth delivery he had Raina out. Paul Stirling took a fine catch to the leading edge from Raina, sprinting backwards. Raina’s knock of 28 had two boundaries and a six.

The score went past the 100-run mark when Smith hit Izharulhaq Naveed for a six to long-off the first ball of the last over. With the last ball of the innings he had Odean Smith caught by Fletcher at long off for 38. His knock off 19 balls had three boundaries and three sixes. From a disastrous 37 for 5 in 4.4 overs, Deccan Gladiators posted 109 for 7 at the end of the 10th over.

New York Strikers chase began on a sensational note. Opener Andre Fletcher scored a six off the first ball of the innings from Josh Little. He hit the third delivery for a boundary and fifth for another six. But he also got dismissed to the last ball of that over caught by Russell at mid-on for 16. The second over from Tom Helm yielded just three runs but opener Stirling used the third over well hitting Zahoor Khan for two consecutive sixes, both to mid-wicket. Odean Smith who bowled the fourth over too was hit for a six and a boundary off his first two deliveries by Stirling. With the third ball Smith ended Stirling’s knock having him caught by Wiese at deep mid-wicket.  Zahoor Khan bowled a brilliant second over giving away only eight runs.

New York Strikers’ hopes now rested on Eoin Morgan and Azam Khan. The sixth over began with Azam Khan htting Andre Russell for two consecutive boundaries off the first two balls and taking 12 runs off that over. Helm was re-introduced to tighten the run flow. Azam hit the second ball for a boundary through the covers.  Morgan too picked two boundaries off the fifth and sixth deliveries.

New York Stirkers needed 31 runs from the last three overs. Andre Russell was introduced for the eighth over. Although Morgan picked a boundary off his third delivery, Russell gave away only six runs.  Morgan smashed Odean Smith over long off for a six and a boundary to take his team closer to the target. Azam too hit Smith for a boundary to take 19 runs off that over.

Player of the Match: Eoin Morgan