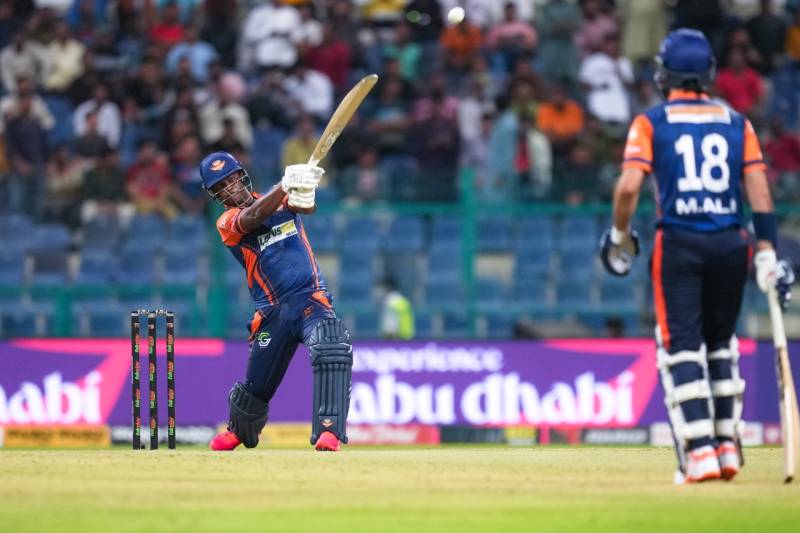 A brilliant three wicket spell from Sheldon Cottrell and a belligerent unbeaten half century from Johnson Charles gave Samp Army their second consecutive victory in the third match of the fourth day in the Abu Dhabi T10 at the Abu Dhabi Zayed Cricket Stadium on Saturday.

Cottrell gave his customary salute after taking a wicket to three Delhi Bulls batsmen in the first over of the match. Bulls never recovered from the blow and got restricted to 94 for 5. Samp Army was then given a quick win by Johnson Charles who hit an unbeaten 58 off 22 ball with ten boundaries and two sixes.

It was a dramatic start to the third match with Samp Army’s opening bowler Cottrell striking with the first ball of the match by having Rahkeem Cornwall caught behind by wicketkeeper Johnson Charles. With the fourth ball, Cottrell struck again to have Rilee Rossouw caught by Ahmed Raza at short third man for a duck. With the fifth delivery he also clean bowled Asif Khan for a duck. Tim David prevented Cottrell from getting a hat-trick.

George Garton, who bowled the second over was hit for two boundaries by David. Cottrell who also bowled the third over was hit for a boundary by David, yet only eight runs came off that over.  Dwaine Pretorius put an end to David’s knock by having him caught behind by wicketkeeper Charles for 16. Anrich Nortje, who bowled the fifth over, could not be forced for runs and at the half way mark  elhi Bulls were struggling at 35 for 4.

Karim Janat, bowling the sixth over, made runs tougher giving only eight runs while Nortje made it tighter yielding just five runs. The first six of the innings came in the eighth over when Tom Banton hit Pretorius for a six to over mid-wicket.  The ninth over saw Keemo Paul hit Garton too for a six to deep mid-wicket and also a boundary off the next ball. The fourth ball too was hit for a six to deep square leg and also the last delivery for another six to same region to take 24 runs off the over.  This gave some respectability to the total too.

Karim Janat bowled the last over and gave away only 10 runs even though Banton hit him for a six over deep cover. Banton got run out to the last ball of the innings for 36 off 27balls with two boundaries and two sixes. Keemo Paul remained unconquered on 36 off 18 balls with three sixes and one boundary. In the end Delhi Bulls posted 94 for 5 in 10 overs.

Chasing the score, Johnson Charles gave Samp Army a glorious start. He hit Waqas Maqsood for three consecutive boundaries off the first three deliveries and off the fourth delivery he hit a six to long on. The over ended with Maqsood dismissing skipper Moeen Ali caught at backward square leg by Rossouw for a duck. Twenty-runs had come off that over.

Shiraz Ahmed who bowled the second over was smashed by Charles for three consecutive boundaries and a six to take 18 runs off that over. Out of total of 38 in two over, 37 of those were scored by Charles.  Gleeson bowled four dot balls to George Garton and only a boundary could be scored off the fifth. Dominic Drakes too gave away only eight runs from the fourth over still Samp Army went past the 50-run mark.

The fifth over began with Charles hitting the first ball of the over from Glesson over the point for four runs. Gleeson ended Garton’s knock of 12 by getting him clean bowled wth the fourth ball. At the half way stage, Samp Army needed 35 runs off the remaining 30 balls.

Skipper Dwayne Bravo introduced himself for the sixth over. David Miller who joined Charles hit the fourth ball from Bravo to fine leg. Charles ended that over picking a boundary through extra cover. He reached his half century off 19 balls with a boundary off Maqsood to short fine leg. He also guided the third ball from Maqsood to the third man fence. This short confirmed a comfortable win.

David Miller hit a boundary off Shiraz Ahmed and remained unbeaten on 20 while Charles hit the winning run off Shiraz’s fourth delivery of the eighth over.

Player of the Match: Sheldon Cottrell