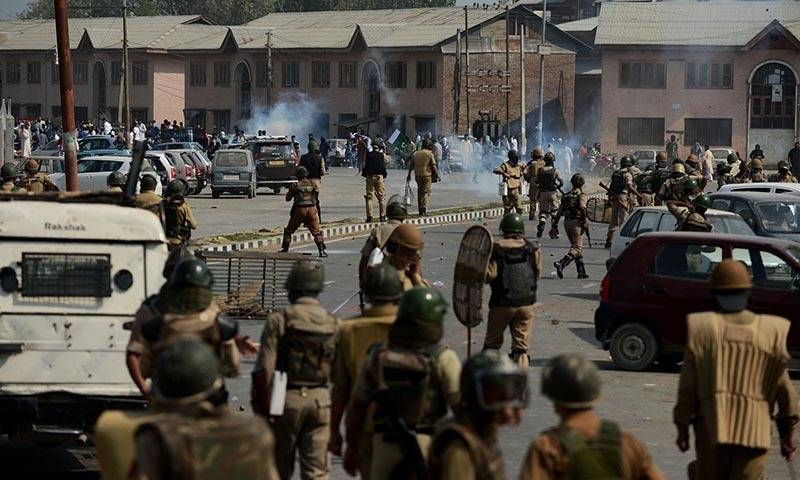 MUZAFFARABAD - The President of Azad Jammu and Kashmir Sardar Muhammad Masood Khan and Prime Minister Raja Farooq Haider Khan in their separate messages termed October 27 the darkest day for Kashmiri people in their history when Indian occupational regime dropped its troops at Srinagar 69 years ago in 1947.

The President Masood Khan in his message on the occasion of Oct 27 Black Day said that Indian authorities bypassed all international commitments and laws which it made in UN Security Council with Kashmiri people and continued its forcible occupation while depriving the Kashmiri people of their birthright, the right of self-determination.

India failed to prove the Kashmir as its integral part despite the huge deployment of eight hundred thousand occupational forces while turning the whole valley into a cantonment, President added.

He opined that this part of Kashmir was liberated from Dogra regime by the people of Azad Kashmir on the dent of its force and also in categorical terms Masood Khan made it clear to India that we will never take any ease till the liberation of occupied Kashmir from Indian forcible occupation, he added.

The AJK President said the India is hoodwinking the international community and it has camouflaged itself under the so-called secularism and democracy.

Masood Khan said that Indian authorities have made the lives of Kashmiri people miserable by launching terror activities in the occupied valley through ruthless killings and torturing of people, molestation of women, use of pallet guns and other inhuman acts which could not be imagined in the civilised world, he maintained.

The AJK President said the base camp of Azad Kashmir will play its due role for liberation of Indian occupied Kashmir and the people of the liberated territory are at the back of their Kashmiri brothers he said adding that the blood of Burhan Muzaffar Wani and sacrifices of other Kashmiri youths will not go waste and yield positive results sooner or later, he observed.

The Prime Minister of Azad Jammu and Kashmir Raja Farooq Haider also in his message on the occasion of Oct 27 Black Day said that Indian nefarious and hegemonic designs were evident from it’s very day when it appear on the world map and its fanatic leadership started to usurp the small states by force.

He said that India continued its nefarious designs and through a conspiracy entered its forces in Kashmir in 1947 while violating the all international laws and UN resolutions and its own pledges which its leadership had made with Kashmiri people, he added.

The PM called upon the UN and the international community to come forward for the sake of humanity and take stalk of the heinous crimes and gross human rights violations of Indian occupied forces in IOK.

He also demanded of the world community to put pressure on India and ensure the safety of Kashmiri people and its leadership and said that Kashmiri people are continuously giving sacrifices for last 69 years against Indian occupation while the Indian rulers are ignoring all human norms and international laws, he said.

He also expressed the concern over the Indian continued occupation on Kashmir and denial of UN resolutions and massacre of Kashmiri people and said that Indian stubbornness would lead the south Asian region towards atomic conflict.

He called upon the UN and peace-loving nations to play their role in resolving Kashmir issue in accordance with UN resolutions and as per aspirations of Kashmiri people in order to avoid the possibility of nuclear conflict in the region.