LAHORE (Staff Report) - World's largest technology giant Google has released a special Doodle as the most popular search engine is marking its 17th birthday on Sunday.

"Google" was founded by Larry Page and Sergey Brin while they were Ph.D. students at Stanford University in 1997. They opted to establish a real time search engine as they research project. Page and Brin originally nicknamed their new search engine "BackRub", but ultimately they named it Google. The domain name for Google was registered on September 15, 1997, while the company was incorporated on September 4, 1998 at the garage of a friend of Page and Brin,Susan Wojcicki, in Menlo Park area of California.

Craig Silverstein, the first employee of Google was also a fellow student its founders. 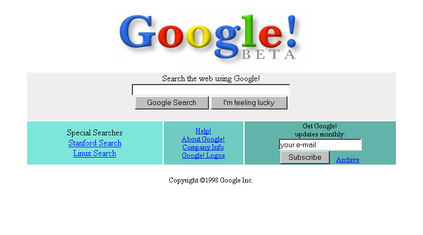 The first funding for Google was a contribution of $100,000 from Andy Bechtolsheim of Sun Microsystems in an August 1998.

Google's formal mission statement from the outset "to organize the world's information and make it universally accessible and useful,"and its unofficial slogan was "Don't be evil".

In 2015 Google Incorporation has become a multinational technology company specializing in Internet-related services and products. These include online advertising technologies, search, cloud computing, and software.

The company's revenue was recorded to be US$66.001 billion in 2014 and it has 57,148 employees according to latest available facts.