ISLAMABAD - The Supreme Court will announce its much-awaited verdict on Panamagate case on Friday (today) at around 11: 30 am.

A 5-member bench, headed by Justice Asif Saeed Khosa, will announce the decision. Two judges - Justice Khosa and Justice Gulzar who earlier disqualified PM Nawaz in the case – are also part of the SC bench.

LAHORE (Web Desk) - Eleven million documents were leaked from one of the world's most secretive companies, Panamanian ...

The apex court had concluded hearing the case and reserved its judgement on July 21. 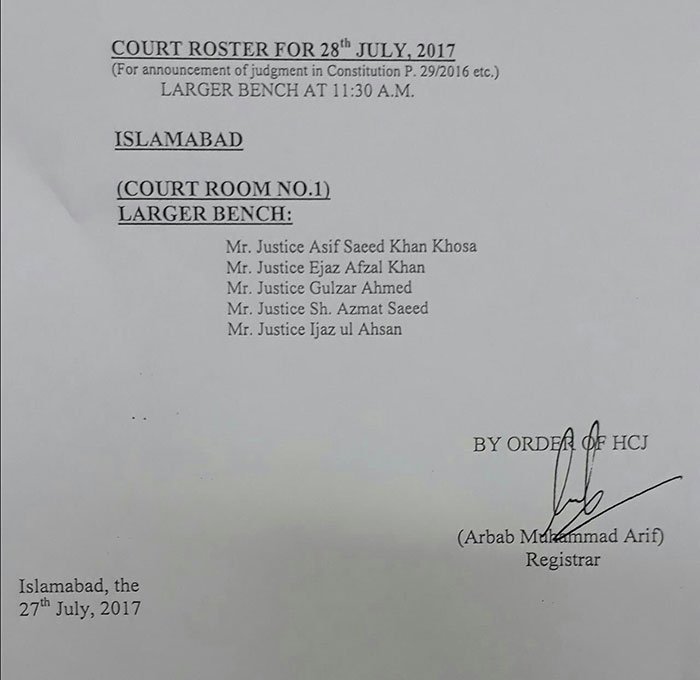 The landmark verdict will be announced in Courtroom 1 of the Supreme Court building.

The apex court had heard the petitioners and defendants in the case after the joint investigation team (JIT) submitted its report on the Sharif family's financial dealings on July 10.

The JIT report maintained that Prime Minister’s family owned assets beyond its known sources of income. It also recommended that NAB open a reference against the premier and his children.

The three-member implementation bench overseeing the JIT had reserved its judgement on July 21.

In his remarks during the last hearing, Justice Ejaz stated that the bench was already reviewing the matter of the prime minister’s disqualification, while Justice Ijaz ul Ahsan remarked that the court would not back down from its decision.