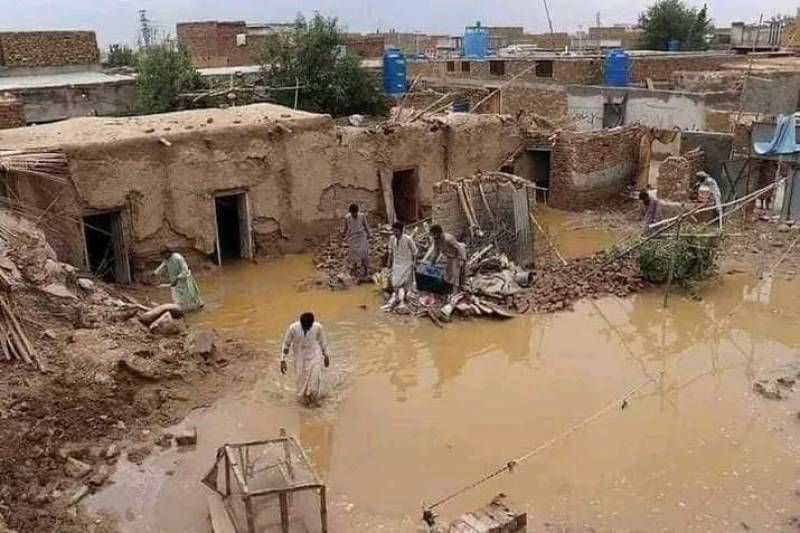 QUETTA – Monsoon rains have killed more than 100 people and destroyed thousands of houses in the Balochistan province of Pakistan.

Speaking at a press conference on Thursday, Balochistan Chief Secretary Abdul Azai Aqili said as many as 111 people have lost their lives so far as heavy downpour continues to hit the province.

The chief secretary said that rains completely tore down 6,077 houses and more than 10,000 homes were partially damaged, according to official statistics.

Aqili said that 16 dams sustained minor or major damages during the rains, while crops and gardens stretching over two acres of land were also harmed.

This time,our brothers of Balochistan are in dire need of us.There is a need for national unity at this time,leaving aside the political upheaval.Human Organizations should be proactive at this time. Neglected rulers should understand their responsibilities#بلوچستان_کی_پکار pic.twitter.com/eili6uIN7d

He noted that 10 districts in Balochistan were affected due to the rains, but fortunately, the situation at the Kech river was under control. The province's top official also mentioned that 650km of roads were damaged in the rains.

The route from Karachi to Quetta has been closed for heavy traffic, he said, urging people to refrain from unnecessary travel — as it was in their best interest.

The chief secretary said that the Pakistan Army, Frontier Constabulary, and civil administration were conducting rescue operations, but damaged roads are hampering the efforts.

In a related development, Prime Minister Shehbaz Sharif formed a committee of federal ministers to assess damages around the country as the death toll from more than six weeks of monsoon rains and flash flooding across Pakistan has crossed 350.

The National Disaster Management Authority (NDMA) said on Thursday rains had claimed at least 357 lives and injured 408 people since mid-June, with the most casualties, 106, taking place in the impoverished southwestern Balochistan province.

Initial videos coming in of devastation caused in #Uthal, #Balochistan and other parts of the province.#SaveUthal #SaveBalochistan #Floods #Pakistan #Monsoon pic.twitter.com/ow1ggju6Mr

“The committee should visit all the affected areas within the next four days and on August 4, short-term, mid-term and long-term comprehensive plans will be formed in the light of the committee’s recommendations,” the Prime Minister’s Office said in a statement, adding that the federal government would fully support provincial governments in dealing with the effects of the natural disaster.

“The federal government will write a letter to the honorable court to provide the funds available in the Supreme Court for the rehabilitation of the infrastructure affected by the recent rains and floods in Karachi,” the PM office said.