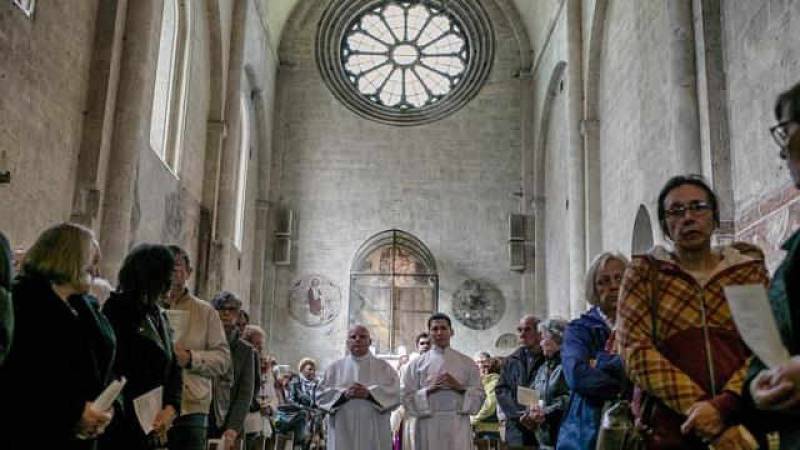 PARIS (Web Desk/Agencies) - Before the altar of a French Alps cathedral, 150 candles today burned brightly for all those who perished in this week's Germanwings crash and their families.

Hundreds of parishioners came from around the region to attend a special mass at the Notre-Dame-de-Bourg cathedral in Digne-les-Bains, about 40 kilometres (25 miles) away from the remote mountain crash site.

The archbishop of Digne spoke to people's feelings of grief and confusion about the tragedy apparently deliberately caused by the plane's co-pilot.

"We are in deep distress, plunged into sadness, unable to understand, and have strong feelings of unfairness," archbishop Jean-Philippe Nault, told some 500 faithful.

He said they had come "to express their friendship" for the families and friends of those killed on board the Airbus A320 traveling from Barcelona to Duesseldorf when it went down on Tuesday.

The residents of the Alpine area have extended the hand of friendship to the families, mainly Spanish and German, who have travelled there to be near the site where the difficult operation of recovering the victims' remains is under way.

"We have received calls from people who have offered to come and help us to translate, or simply give their time" to aid those mourning the sudden death of their loved ones, Florence Beauquis, who works at the Digne city hall, said.

According to officials of the Alpes-de-Haute-Provence region, nearly 1,300 families spontaneously, in the space of a few hours, offered to put up the victims' relatives as they began arriving in the region on Tuesday.

The outpouring of support from the local community "warms the heart", Roselle Lopes, who lives in Avignon and said her Spanish cousin lost her husband in the crash, said.

And on the eve of Palm Sunday -- a week before the Christian holiday of Easter -- the locals came to the Notre-Dame-de-Bourg in Digne to offer their thoughts and prayers for all who have suffered from this tragedy.

"My heart goes out to them," an 81-year-old woman, who gave just the name Jacqueline, said. "They can't mourn before a tomb or a coffin when there isn't anything there....."

Five days after the crash, Francis and Michele from a neighbouring village to Digne said they were still in shock, finding it "hard to understand."

According to French officials, Andreas Lubitz, 27, locked his captain out of the cockpit of the Germanwings jet and deliberately flew Flight 4U 9525 into a mountainside.