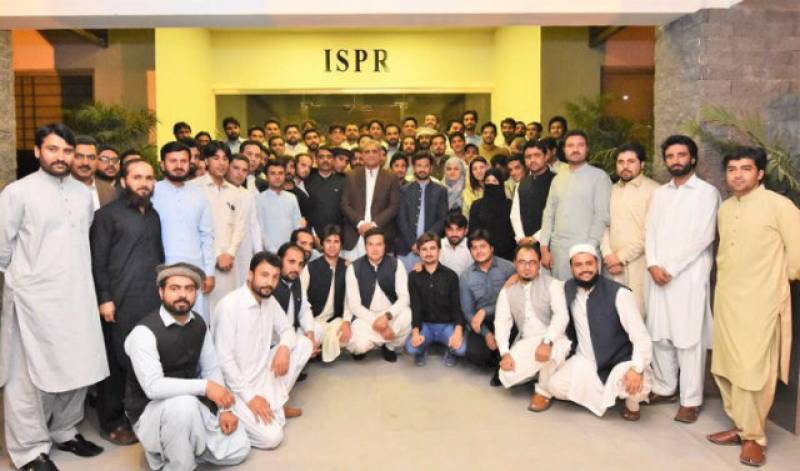 The top military commander commended motivation and passion of the youth in realisation of this merger, and said that “the mainstreaming shall bring enduring peace, stability and socio-economic development of the long-neglected and terrorism rid area”.

“The state is determined to root out extremism and terrorism for which youth has a great role to play. Focus on your peaceful endeavours, participate in political and democratic activities. We have achieved peace at a very high cost of blood and national exchequer and we shall never let it lose,” Bajwa was quoted by the army’s media wing as saying.

“You, the youth, is future of Pakistan. Please come forward and play your positive role. Be aware of inimical forces trying to create / exploit faultlines. Stay united and steadfast. We have to rise, IA we shall”, COAS. pic.twitter.com/5t67MlqQWa

In a meeting with the army chief, the Youth Jirga of erstwhile FATA acknowledged and appreciated Pakistan Army's efforts for bringing back peace, stability and socio economic development in the area.

They also acknowledged Gen Bajwa’s special interest towards mainstreaming of the tribal areas previously administered by the federal government.

The COAS lauded youth for their determination and support to Pakistan Army in the fight against terrorism. He valued their views regarding future of Pakistan.

COAS congrats brave tribes of erstwhile FATA on its mainstreaming through merger in KP. This shall facilitate bringing enduring peace, stability and socio-economic development in the area. pic.twitter.com/B7Ge8aux3a

“Be aware of inimical forces who wish to exploit fault lines and try to reverse our gains. They shall never succeed,” he emphasized. “Achievements through sacrifices of brave tribals are being consolidated while we transit from relative stability to enduring peace.”

The army chief also shared his engagement with Afghan leadership for enhanced cooperation and security measures along Pak-Afghan border. He advised the youth to continue playing their role towards peace and progress of Pakistan as they are the future leaders.

On Sunday, the Khyber Pakhtunkhwa (KP) Assembly approved the KP-Fata merger bill, paving way for the merger of the Federally Administrated Tribal Areas (FATA) with the province.

The bill was passed with two-thirds majority — a Constitutional prerequisite for the proposed merger. As many as 92 lawmakers voted in favour while seven MPAs used their votes against the bill.

Following the provincial assembly’s approval, the landmark bill will bring the tribal borderlands, comprising seven agencies and six Frontier Regions, to the mainstream and they will be merged with Khyber Pakhtunkhwa. Tribal people will get representation in the KP Assembly through the amendment.