‘Nanak palace’: Narowal haveli is not a religious site 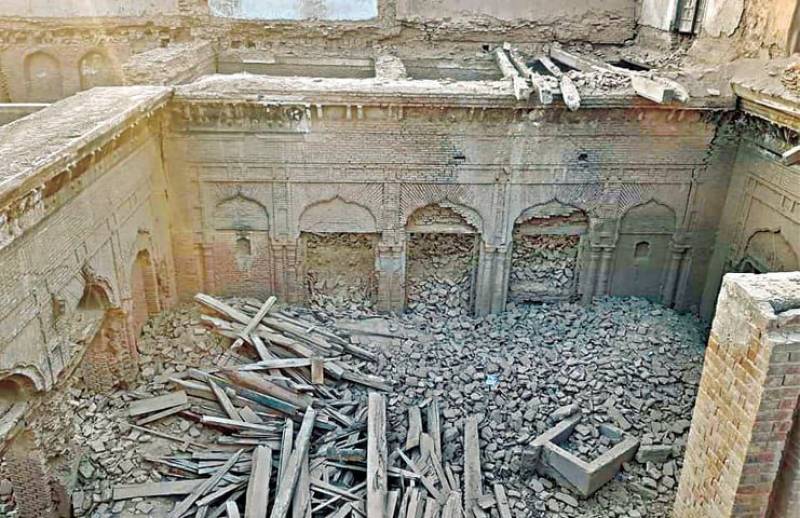 LAHORE – Pakistanis are yet not feeling relieved of ‘guilt’ and ‘shame’ following the massive criticism, especially from across the border, invited by the country’s oldest newspaper’s incorrect report on the demolition of a centuries old structure in Punjab.

The Dawn’s story, titled "'Historical Guru Nanak palace' partially demolished by locals in Narowal”, in which it was claimed that that the four-floored historical building was demolished after precious stuff stolen, took the world by storm on Monday.

However, it was later revealed that the claim made by the leading English daily is false and incorrect. The abandoned structure in Bathanwala village, about 20 km from Narowal city, was once called ‘Nanak Palace’, not ‘Guru Nanak Palace’ as named in the Dawn’s story.

In its clarification, the newspaper said the report “did not say that the haveli belonged to Guru Nanak or was a sacred place for Sikhs. It only mentioned that some locals had named it ‘Guru Nanak palace’ because of his pictures they found on the walls.”

“Travel writer and poet Irfan Shahood had visited the haveli – or saraye -- and documented it through pictures and a blog last year. He rejected the impression that the haveli had anything to do with the founder of Sikhism [Baba Guru Nanak], adding that it was not a sacred place related to Sikh religion or its founder, but just a haveli. Locals knew the building as ‘Haveli Ranjit Singh’,” the clarification added.

The newspaper also insisted in its report that many Sikh devotees also visited the building, being a historical site, during their religious visits.

However, this claim also turned out to be false as Evacuee Trust Property Board (ETPB) and Auqaf, the two government offices responsible for the religious sites of minorities in Pakistan, have maintained that the site is not registered with any of the authorities as a religious site.

Sardar Mahinder Pall Singh, a lawmaker of ruling Pakistan Tehreek Insaf from Multan, rubbished the story amid a call for peace and harmony among all citizens of the South Asian country.

Singh said this false report did not only hurt the sentiments of the 120 million Sikh community but also damaged the credibility of newspapers and TV channels which carried Dawn’s story.

“It was not Gurdwara or Gurunanak Palace as was reported by media. Actually, it was Nanak palace owned by one Nanak Singh who had built this Haveli but later migrated to India after partition. It was then occupied by a Gujjar family who broke it for renovation,” he added.

“All they did was adding a prefix 'Guru' to the word Nanak.”

After being carried by Pakistani and Indian TV channels, the Dawn's story went viral online with #GuruNanakPalace kept trending all day long and people criticising Pakistani officials. But soon after the fake news was debunked, social media users changed their targets from the authorities to Dawn and other media organisations and “the hands they playing in”.

I join the #Sikh community in condemning the demolition of historical #GuruNanakPalace in #Pakistan's #Punjab province by some vandals in connivance with Auqaf authorities. As #Sikhs are deeply anguished, I urge @narendramodi ji to strongly take it up with Pak PM @ImranKhanPTI pic.twitter.com/r91oleknOW 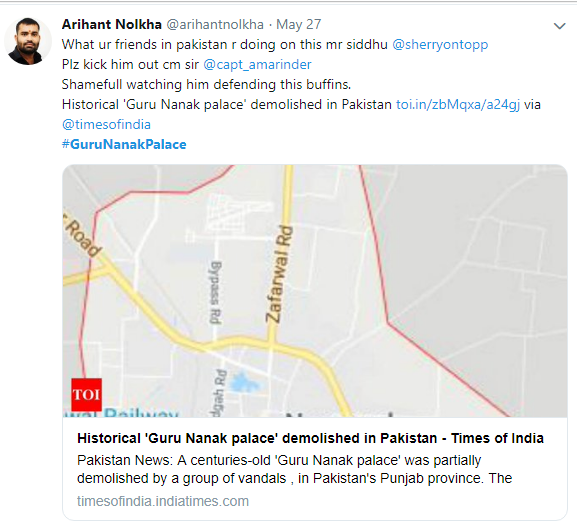 The report came at a time when both nuclear-armed neighbours are working on a joint visa-free corridor between Gurdwara Darbar Sahib in Narowal’s Kartarpur and Dera Baba Nanak in India’s Gurdaspur district. And many Sikhs believe this fake news was an attempt to sabotage the Kartarpur crossing - dubbed as an initiative for peace.

Bishen Singh Former President #PSGPC dubbed #NanakMahal controversy was created to Sabotage #KartarpurCorridor project . A building in Bathanwala village in Narowal has no sacred value and nothing to do Baba #GuruNanakDev’s a house, said he . pic.twitter.com/pvP8XeoKqy

Pakistan has said that the work on the corridor will be completed before the 550th birth anniversary of Baba Guru Nanak in November this year.

The Kartarpur corridor is expected to provide visa-free access to Indian Sikh pilgrims to the Gurdwara in Kartarpur Sahib — the final resting place of Sikh faith founder Guru Nanak.