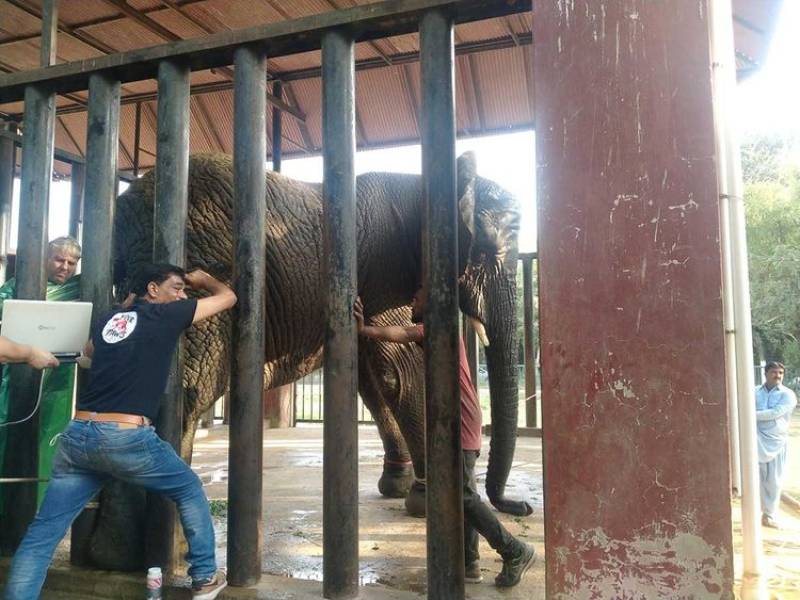 KARACHI – A team of experts, which examined the “world’s loneliest elephant” in Islamabad almost a year ago, arrived in Karachi on Sunday to assess the health of four other elephants, which animal rights activists say are not being kept in proper conditions.

Kaavan, which was described as "world's loneliest elephant", was rescued from Islamabad to a sanctuary in Cambodia in November last year.

Kaavan was the last Asian elephant in captivity in Pakistan. The 36-year-old bull elephant was kept at Islamabad’s dilapidated zoo. Animal rights groups launched a campaign to save him from the substandard conditions there, which was boosted by spirited social media support from US actress and musician Cher. The elephant was rescued to a sanctuary in Combodia on November 30, 2020.

The team comprising international veterinarians and wildlife experts from FOUR PAWS, a Vienna-based global animal welfare organization, began assessing health of African elephants, Malika and Sonu, at Karachi’s Safari Park. The experts will examine health of Noor Jehan and Madhubala, two other African elephants kept at Karachi Zoo, on Monday and submit their assessment report to a court on Tuesday. According to officials, these are the last four African elephants left in Pakistan.

In September, the Sindh High Court (SHC), while hearing a petition by animal rights activists, granted permission to Dr. Frank Goritz, the head veterinarian at Leibniz Institute for Zoo and Wildlife Research (IZW), to visit Pakistan to inspect heath of these elephants. The petitioners had moved the court after a video showed cracks in Malika’s foot.

The Karachi Metropolitan Corporation (KMC) had opposed the move and pleaded with the court that the inspection be carried out by vets from Lahore Zoo and the Sindh Agriculture University. But the court rejected the KMC’s plea.

On Sunday, Dr. Amir Khalil led a team of veterinarians and wildlife experts, including Dr. Frank Goritz and Prof Thomas Hildebrandt from IZW and Dr. Marina Ivanova from FOUR PAWS, which concluded its examination of two elephants. The experts were amazed that Sonu, whom the authorities said was a male and brought especially for breeding purpose, turned out to be a female.