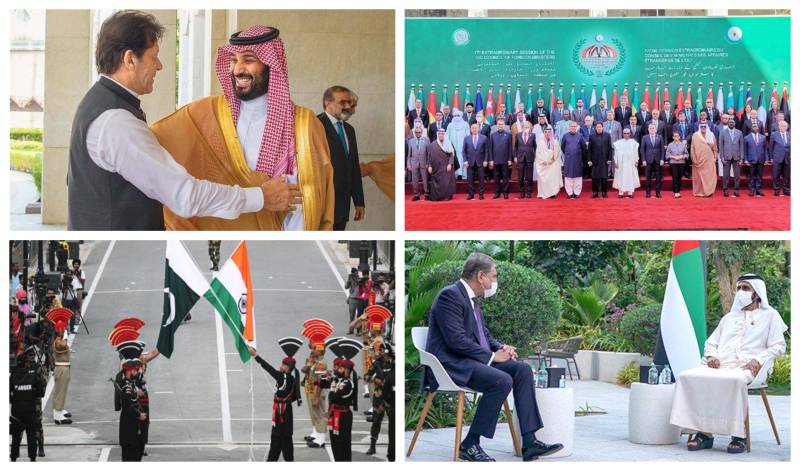 Nearly after a year of battling with Covid-19 and its economic fallout, Pakistan entered 2021 with multiple challenges, the especially fast-changing situation in northwestern neighbour Afghanistan, on the way ahead and aspirations for regional peace and strengthening diplomatic ties with the world.

In the outgoing year, Pakistan witnessed an upward trajectory in relations with the Gulf States but received a mixed response from the new administration in the US.

Here are some events that provide a sneak peek into Pakistan’s engagement on the diplomatic front in 2021.

In mid-August, the Taliban took control of Afghanistan after former president Ashraf Ghani’s government failed to resist the group following the withdrawal of US-led foreign forces.

The lightning power shift triggered chaos and panic among the people of the country and also brought the country to the verge of a humanitarian crisis as the US and its allied countries froze Afghanistan’s assets and suspended aid of millions of dollars.

As thousands of people in Afghanistan were trying to leave the country, Pakistan facilitated the evacuation of 16,000 diplomats, foreigners, aid workers, journalists, and vulnerable Afghans on special flights run by its national flag carrier.

Pakistan also came forward with a campaign for Afghan people as it has been urged the international community to provide assistance in order to avoid a humanitarian crisis in the country. Pakistani authorities not only held several meetings with regional powers but also hosted an extraordinary summit of the Organization of Islamic Corporation (OIC).

On December 19, Pakistan hosted the 17th Extraordinary Session of the OIC Council of Foreign Ministers, and it was attended by 70 delegations from OIC member states, non-members and regional and international organizations.

During the session, the OIC vowed to play a leading role in delivery of humanitarian assistance to the people of war-torn Afghanistan and unanimously agreed on setting up a Humanitarian Trust Fund, launch a Food Security Programme and engage with the World Health Organization to secure vaccines and medical supplies.

The engagement between Pakistan and Saudi Arabia saw a positive trend in 2021 as Prime Minister Imran Khan visited the kingdom twice in the year.

KARACHI – Saudi Arabia has deposited $3 billion in Pakistan's foreign reserves for one year at 4% interest under ...

Kuwait also announced to relax visa restrictions for Pakistanis after a hiatus of 11 years. The development had come after Kuwait’s foreign minister Ahmed Nasser Al- Sabah visited Islamabad in March.

Pakistan and Bahrain also held the second session of the Joint Ministerial Commission in July 2021.

Pakistan’s relationship with its all-weather friend, China, further strengthened in 2021 despite a violent attack on Chinese nationals working on the Dasu hydroelectric project – a part of the multi-billion dollar China-Pakistan Economic Corridor (CPEC). The work on the project has resumed after it was halted for several months following the attack that killed some Chinese workers.

In a major development, Beijing hosted the 15th session of the Pakistan-China Joint Economic Committee (JEC) on Economic, Trade, Scientific, and Technical Cooperation after a gap of 11 years.

Pakistan has been a long partner of the US in its war on terror following the deadly 9/11 attacks. But the US administration remained reluctant to openly accept Pakistan’s efforts in the Afghan peace process.

The ties between the two countries touched a new low as US President Joe Bide-led did not contact with Pakistani government after assuming the charge.

After the Taliban came into power in Afghanistan, US Secretary of State Antony Blinken said in the public hearing in Congress in September that Washington will “recalibrate” its relationship with Pakistan.

ISLAMABAD – Pakistan has turned down the US invitation for participation in the Summit for Democracy, being held ...

Earlier this month, Pakistan snubbed Biden’s invitation to virtual summit for democracy, saying the South Asian country “can engage on this subject at an opportune time in the future”.

Ceasefire between Pakistan and India

In February, a special hotline contact was established on Thursday between the DGMO of Pakistan and India in a bid to defuse the volatile situation along the Working Boundary (WB) and the Line of Control (LoC).

UNITED NATIONS/WASHINGTON – The United Nations and the United States have welcomed Thursday's joint statement of ...

Pakistan DGMO expressed commitment to peace but indicated that if such aggressive actions continue, the same will be effectively responded which will have detrimental effects on peace and tranquility along the LOC.