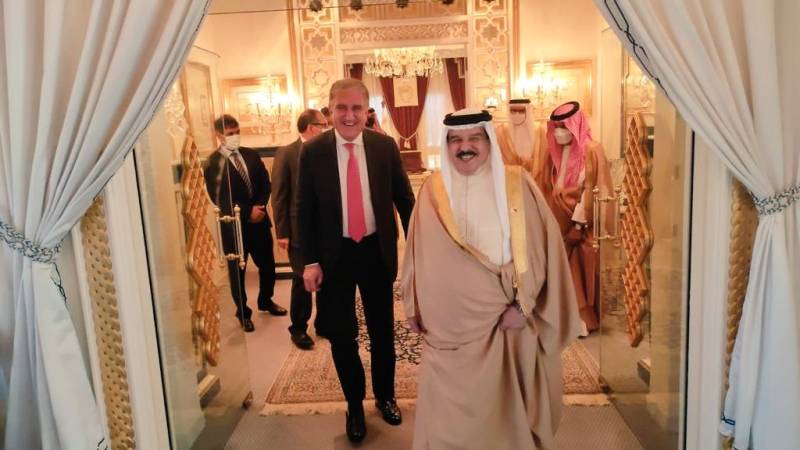 At a meeting with Qureshi, King Hamad bin Isa Al Khalifa highlighted the depth of historical relations between the Kingdom of Bahrain and the Republic of Pakistan that are based on mutual understanding, confidence, respect and cooperation.

He was speaking after receiving Foreign Minister Shah Mahmood Qureshi who is on a visit to the kingdom to participate in the Bahrain-Pakistan Joint Committee meeting.

The King praised the outcome of the Bahrain-Pakistan Joint Committee meeting which will further enhance bilateral cooperation in various fields. He also lauded the advanced level of bilateral relations and common keenness to further consolidate them.

The King commended the role of the Pakistani community and its remarkable contribution to the kingdom’s development.

The Pakistani foreign minister thanked the King for the gracious welcome and unwavering support to friendly relations between the two countries.

Honoured to call on His Majesty King Hamad Bin Isa Al Khalifa today & to convey warm wishes of President @ArifAlvi and the Prime Minister @ImranKhanPTI to his Majesty. Pakistan and Bahrain enjoy a close and fraternal relationship deeply rooted in common faith and history. pic.twitter.com/MdSOG4pXXv

He said that Pakistan wanted to enhance economic linkages with the Kingdom of Bahrain. The two sides also discussed matters related to welfare of the Pakistani community in Bahrain.