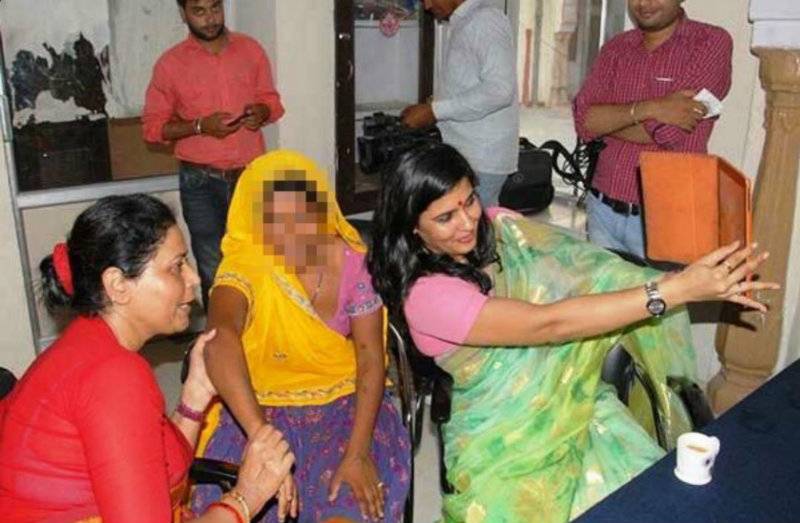 JAIPUR: A selfie taken by a high-ranking Indian official with an alleged rape survivor has led Indian social media to question the State government's attitude towards women.

Rajasthan State Commission for Women chairperson Suman Sharma was caught in a row yesterday after one of her colleagues took a selfie with a victim of domestic abuse. The woman had accused her husband and in-laws of tattooing abuses on her body after she was unable to meet their dowry demands.

Seven Indian boys lose their lives for a selfie

Sharma and her colleague Saumya Gurjar were hearing the victim as part of their probe when the latter took a picture with the victim on her cellphone. The picture shows Sharma and Gurjar, along with the victim, holding her iPad in a cheerful mood while the chairperson also leaned in for the photo.

"The one who circulated the picture has shown disrespect to the rape survivor. We will take note of it," said Ms Sharma, who, incidentally, is also in the selfie.

Congress, the opposition party in Rajasthan, has accused the Commission and the BJP government in the state of being insensitive towards women.

State Congress spokesperson Archana Sharma said: “Despite a court order, the FIR was registered after 10 days. It shows the state government’s attitude towards women. The Women’s Commission is a statutory body and this sort of conduct shows the lack of commitment of office-bearers.”

This Selfie-Special Camera is Trending in China

However, Ms. Sharma says she wasn't aware of when the selfies were clicked and told Indian media that she had already asked her colleague for a written explanation.

"I was talking to the victim when the member of the commission clicked these selfies. I am not aware when she (Somya Gurjar) clicked. I do not favor such act and have sought a written explanation from her," she told Press Trust of India.

The 30-year-old woman met by the panel has alleged that she was raped by her husband and his two brothers, who allegedly also branded and tortured her because she was unable to fulfill their dowry demands, worth Rs. 51,000. Expletives were tattooed on her forehead, allegedly with an acid-based substance.