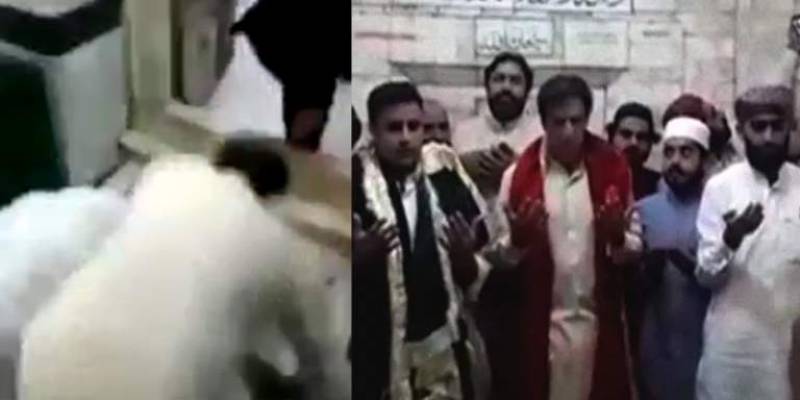 ISLAMABAD - The Shrine visit of Pakistan Tehreek-e-Insaf chief Imran Khan has once again set tounges wagging after a new video reignited the controversy of bowing down in a Shrine.

The PTI supremo had bowed town twice along with his wife, Bushra Maneka when they paid a visit to the shrine of  Baba Fariduddin Ganjshakar in Pakpattan on Wednesday night.

An earlier video circulating on social media showed that the couple bowed down to the shrine of great Sufi at the entry point.

Imran’s rare gesture was well noted by social media, with political commentators, equating the move with a Sajda (prostration only done before Allah Almighty by the Muslims).

SAHIWAL - Pakistan Tehreek-e-Insaf (PTI) Chairman Imran Khan along with his wife, Bushra Maneka, paid a visit to the ...

The new video shows the politician bowed down the second time in the shrine of the great Sufi saint.

Imran Khan has clarified his position over his ‘controversial’ action at a Sufi shrine in Punjab, following a religio-political storm that has gripped the social media since the video went viral.

LAHORE - The top contender for Pakistan’s top office of Prime Minister, Imran Khan has clarified his position over ...

Sajda is only for Allah, I only kissed the floor of the mazar (shrine) out of my respect for the great individual that he was, for his services to Islam. This makes you more humble and removes your ego,the chairman of Pakistan Tehreek-e-Insaf (PTI) told the host of a show on Dunya TV.