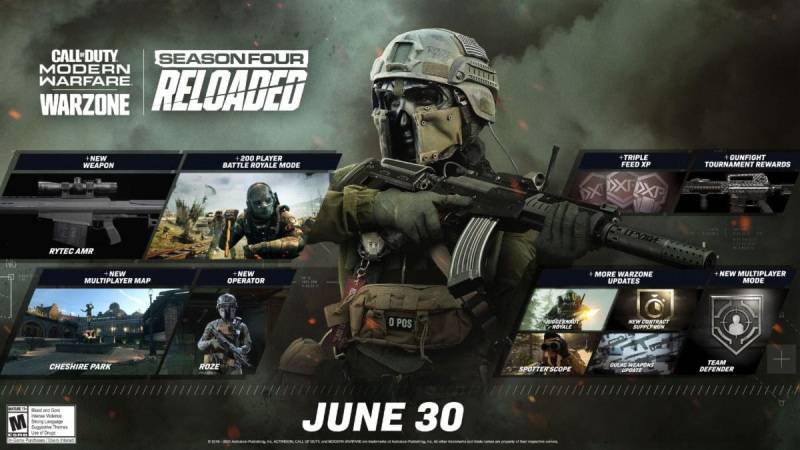 'Season 4 reloaded' that's what Activision and Infinity Ward are calling the new Call of Duty Modern Warfare mid-season 4 updates. With a massive size of almost 36 GB, the game has made a special place in the hearts of fans and their hard drives. With exciting new game modes, loot, and an operator, this update seems to address the demand of fans. Activision and Infinity Ward have done an excellent job of keeping the game fresh yet close to its roots.

The immensely loved Warzone is introducing an increase in players for Battle Royale Quads bumping the number of players from 150 to 200. So players, brace yourself for a lot of action at the Superstore! A new game mode Juggernaut Royale has also been added, which will drop one Juggernaut Suit on the map; players who go into gulag will lose the suit but don't worry, look up towards the sky as another one will soon drop.

Spotter Scope is yet another new addition to warzone loot items. The scope is a reusable item enabling players to scan the environment just like a sniper scope, and for all of you crafty players, don't sweat, as it will have no optical glint helping you keep a low profile.

The gulag will be introducing new weapons with semi-auto rifles and snipers coming into the fray, and for all of you daredevils, there will also be a load out with just fists and throwing knives.

Modern Warfare multiplayer players can rejoice as a new map is going to be introduced. The map is called Cheshire Park and has been known as The Garden in previous leaks. This will be ideal for players who love close-quarters combat and mid-range flights.

Team Defender, a new mode, has also been introduced in multiplayer. It is a game mode that has made its way in the previous Call of Duty Franchises. The mode is similar to capture the flag, but there will be only one flag present rather than two. The player who holds the flag will earn the whole squad a point per second, the squad with the most point wins. so keep your friends close, and the flag closer.

Rytec Amr is a new addition to the sniper rifle category. The gun can be unlocked by completing a challenge. It can also be bought from the store via the 'Lost Souls' bundle. The store will also be featuring a new operator, 'Roze.' Several other bundles Rogue Operative, Golden Idol, and Rifle Juliet blueprint, will also be added to the store.

These are exciting times, as many other subtle changes are also expected in the update. There are several rumors of changes in the Warzone map; many have speculated that the Stadium will now be open for players. Several guns will also be balanced with the Grau, and Mp5 receiving nerfs, which will shift the Meta quite a bit. Hopefully, this update will also fix several lags and server issues that have plagued the game since release. Players will be able to experience all of this and more as the update goes live on 30th June at 11:00 am Pakistan and 29th June 11:00 pm Pacific time.

The author is a gaming enthusiast and loves writing about technology.