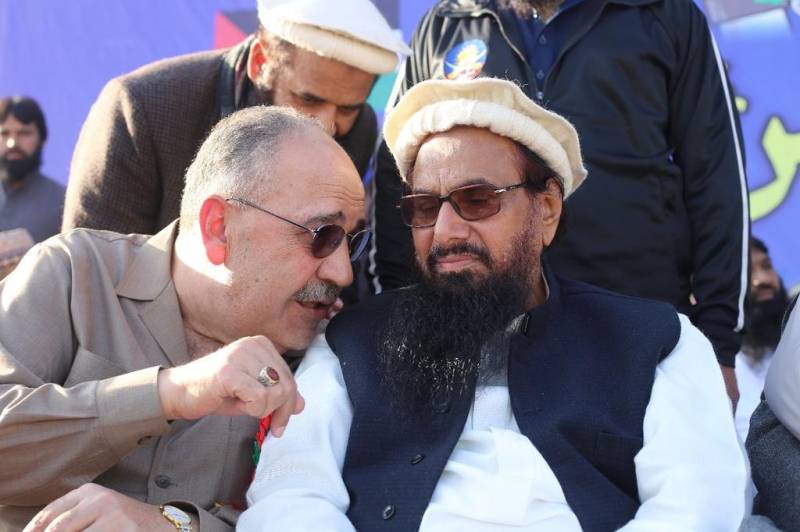 ISLAMABAD - Palestine has recalled its envoy to Pakistan after India objected to his appearance in a public meeting on Al Quds along with Jamaatud Dawa (JuD) chief Hafiz Saeed.

“The minister of foreign affairs and expatriates under the direct instructions of the president of the state of Palestine has decided to recall the Palestinian ambassador to Pakistan immediately,” a statement by the Palestinian foreign ministry said on Saturday.

"Ambassador’s decision to participate in the rally with Hafiz Saeed was an “unintended mistake, but not justified,” the statement added.

On Friday, the Palestinian Ambassador to Pakistan had attended a rally by the Difa-e-Pakistan DPC), an Islamist front led by Hafiz Saeed at Rawalpindi’s Liaqat Bagh.

Ambassador Ali had been photographed sharing the stage with Saeed, accused of being the mastermind of the Mumbai 26/11 attacks.

While the rally had been held to express solidarity on Jerusalem’s status, anti-India slogans on Kashmir were raised as well.

The photographs and reports were received with condemnation in New Delhi, and civil society groups like the India Palestine Solidarity Forum (IPSF) had demanded that Palestine President Mahmoud Abbas sack Ambassador Ali.

India was among the countries that voted in favour of a UN resolution that effectively rejected Mr Trump’s move and asked member states not to establish diplomatic missions in Jerusalem.

Prime Minister Narendra Modi is expected to visit Palestine in early 2018, and the decision of the Palestinian diplomat to support one of India’s most wanted terrorists could cast a shadow on the plans.

Meanwhile, the Foreign Office said that Pakistan’s unambiguous and steadfast support for the Palestinian cause was well known.

“The people and government of Pakistan respect the Palestinian ambassador’s active participation in events organised to express solidarity with the people of Palestine,” the spokesman said.