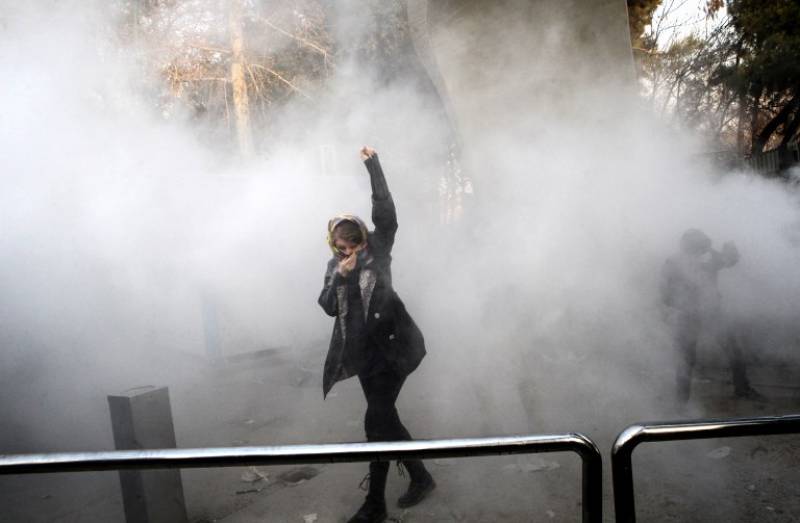 According to local media reports, Iran warned on Sunday that protesters will “pay the price”. Some videos on social media showed thousands marching across the country, an official in the small western town of Dorud confirmed two people had been killed during protests, but denied security forces had fired on the crowd.

“Unfortunately in these clashes two citizens from Dorud were killed. No bullets were fired by the police, military or security forces towards the people,” he said.

Videos on social media overnight showed demonstrations in Isfahan, Mashhad and many smaller cities but travel restrictions and limited coverage by official media made it difficult to confirm reports.

#Update78- Clashes between protesters and security forces in most of the cities continues but just now #Kermanshah is very tense.

Protesters are trying to push back security forces as soon as they start attacking people.#IranProtests pic.twitter.com/JDMrSnkn7M

Semi-official conservative outlets confirmed an evening attack on a town hall in Tehran and showed protesters attacking banks and municipal buildings in other parts of the country.

“Those who damage public property, disrupt order and break the law must be responsible for their behaviour and pay the price,” Interior Minister Abdolrahman Rahmani Fazli said on state television early on Sunday.

“The spreading of violence, fear and terror will definitely be confronted,” he added.

In one of the few official reports, an official in Arak, around 300 kilometres southwest of Tehran, said 80 people had been arrested overnight.

“Some intended to enter and damage some government places but the attackers did not manage to achieve their goals... and the town is under control,” the unidentified official told the ILNA news agency.

Iranian authorities said the majority of social media reports were emanating from regional rival Saudi Arabia and exile groups based in Europe.

Internet was temporarily cut on mobile phones on Saturday night but was restored not long after.

President Hassan Rouhani, who came to power in 2013 promising to mend the economy and ease social tensions, has so far not made any statement since the unrest started in second city Mashhad on Thursday.

The protests began in Mashhad against high living costs and the struggling economy before spreading quickly to other areas and turning against the Islamic regime as a whole.

Slogans such as “Death to the dictator” have been heard throughout the protests.

#IranProtests: Hundreds of thousands across #Iran chant "We don't want Islamic Republic!" & "Clerics shame on you, let go of our country!" Woman in video took off her #Hijab to protest Islamic dress code imposed on Iranian women since 1979. #IStandWithHer pic.twitter.com/CHNwrTsWPA

There have been reminders of the regime's continued support among conservative sections of society, with pro-regime students outnumbering protesters at the University of Tehran on Saturday.

Pre-planned rallies to mark the defeat of a 2009 protest movement also saw thousands of regime supporters out on the streets across the country on Saturday morning.

But the anti-government protests appear to have been driven in large part by poorer sections of society, angry over high unemployment, soaring prices and financial scandals.

“These protests are driven by the lower levels of society who have been hit by major economic problems, particularly losing their money when credit institutions collapsed,” said Payam Parhiz, editor in chief of reformist media network Nazar, which first broke news of the Mashhad protests.

“These economic protests are not something that has started overnight, it's been at least a year since these people lost their money in credit institutions and have been protesting at various places,” he told AFP.

Unemployment is particularly high among young people, who have grown up in a less restrictive environment and are generally considered less deferential to authority.

Since the 2009 protests against a disputed presidential election that gave hardliner Mahmoud Ahmadinejad a second term were ruthlessly put down, many middle-class Iranians have abandoned hope of securing change from the streets.

But low-level strikes and demonstrations have continued, with bus drivers, teachers and factory workers protesting against unpaid wages and poor conditions.-Agencies