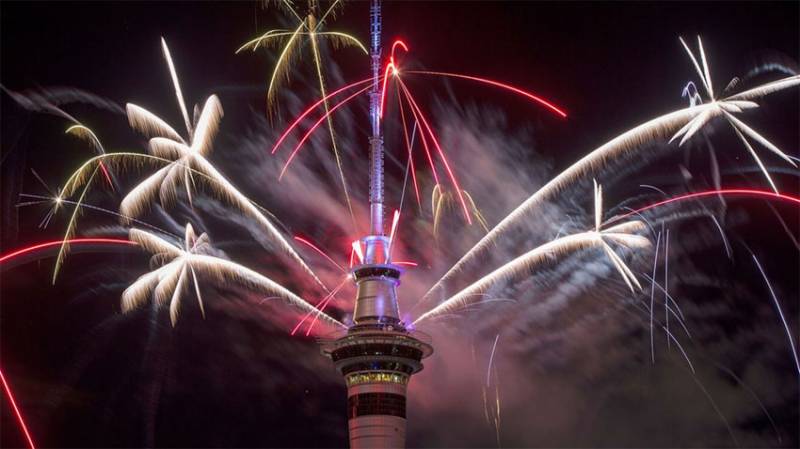 LAHORE - The New Year celebrations have begun across the globe. Samoa, the tiny pacific island was the first country to welcome in 2018, with New Zealand following an hour later.

Half a tonne of fireworks were set off from Auckland’s Sky Tower as the clock struck midnight at 11: am GMT.

Following the Kiwis, Australians welcomed 2018 with a rainbow-themed fireworks in Sydney. About 1.6 million people attended the fireworks around the edge of Sydney Harbour.

About 1.5 million people packed the city’s foreshore to watch the pyrotechnics light up the sky above the historic bridge and the iconic opera house, the first major celebrations worldwide after New Zealand.

Over 24 hours, cities across the world will gradually sign off 2017 and welcome the new year, from New Zealand and Australia, the celebrations will move to Asia, the Middle East, Africa, Europe and finally the Americas.

Stricter security has been a key focus amid fears that crowds could be targets for vehicle and other terror attacks.

In Australia, the stronger police presence included some officers carrying semi-automatic rifles in Sydney and bollards used as barriers against vehicles.

Earlier in December, one man was killed and more than a dozen hurt when a man ploughed a car into a crowd of pedestrians in Melbourne.

Other cities are also on alert following deadly vehicle assaults over the past two years in Barcelona, Nice and London.

New York’s Times Square celebrations are set to go ahead despite the Arctic chill gripping much of the central and northeastern United States and Canada.

But revellers there will be guarded by the strongest security presence in years after two recent attacks apparently inspired by the Islamic State group.