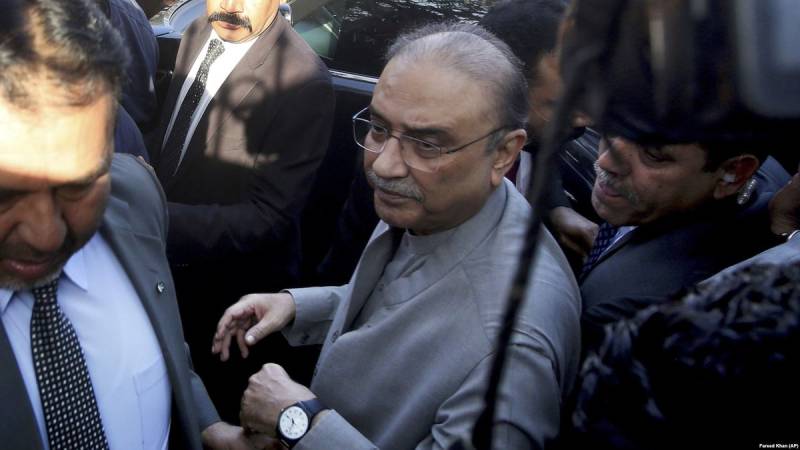 ISLAMABAD – The Supreme Court directed the federal government to review its decision to place 172 individuals including prominent politicians – named in the JIT report – on the Exit Control List, as it resumed hearing the long-running mega money laundering and fake bank accounts case on Monday.

Chief Justice of Pakistan Mian Saqib Nisar, who is leading a two-judge bench hearing the suo motu case, expressed anger at the inclusion of Sindh chief minister Murad Ali Shah and others on the no-fly list and questioned how the federal government could justify adding 172 individuals to the ECL.

The top judge also summoned Minister for State for Interior Shehryar Afridi after the attorney general failed to give a satisfactory answer and also sought the approved summary by the cabinet regarding the ECL list.

"Tell your seniors, this country will only be run according to the Constitution," the judge observed, and instructed the attorney general to take the ECL matter to the cabinet for review.

Justice Nisar further warned the government and other parties to refrain from analysing the case, as it was still being heard by the court.

He added that some people were giving the impression that the proceedings in the case were being done on the command of "someone", but it is not true, the court is issuing the orders on its own conscience.

Shehryar Afridi apologised for statements passed by ministers relating to the case, and assured the court that it would not happen again.

Pakistan Peoples Party’ top leadership including Zardari, Bilawal, Faryal Talpur, and Sindh CM Shah are among those placed on the no-fly list as the Federal Investigation Agency (FIA) continues its probe in the Rs42 billion money laundering scandal.

The JIT probing the money laundering case had held the Zardari and Omni groups responsible in its report submitted to the apex court last Monday. The report had also suggested that all the suspects in the case be placed on the ECL.

In view of the JIT findings, the federal government on Friday released a list of 172 suspects whose names were placed on the no-fly list. The list included Bilawal, Zardari, Sindh chief minister Syed Murad Ali Shah, presidents of a number of local banks, and other former ministers and bureaucrats.

The bench has given Zardari and his sister Faryal Talpur one week to submit a reply over a Joint Investigation Team (JIT) report.

Today’s hearing was then adjourned till next Monday, January 7.

Despite the top court’s annoyance over the issue, Federal Minister for Information Fawad Chaudhry on Monday once again demanded that Sindh Chief Minister Syed Murad Ali Shah should resign after his name appeared in a JIT report over fake bank accounts.

Addressing a news conference in Islamabad, he said how PPP chairman Bilawal Bhutto Zardari can topple the PTI government when even his father, former president Asif Ali Zardari had failed to achieve that in the past, Express News reported.

The PPP chairman, earlier in the day, had claimed that his party could topple the government of Prime Minister Imran Khan within seconds if his father, PPP co-chairman Zardari permitted.

Hitting hard on the incumbent government over the federal cabinet’s decision to place JIT-accused persons in fake accounts case on exit control list, Bilawal laughed off PTI’s attempt to oust the Sindh CM Shah and impose governor rule in the province.

The ECP on Monday issued a notice to the petitioner of Pakistan Tehreek-e-Insaf (PTI) leader Khurram Sher Zaman for initial hearing.

The PTI leader had filed a petition seeking Asif Ali Zardari’s disqualification for allegedly concealing a flat in the United States.

The plea maintains that the former president was elected from NA-213 and the New York property was not mentioned in the asset details submitted to ECP, a private news channel reported.

“Concealing assets comes under article 62 (1) (f) of the constitution. Zardari has not remained ‘Sadiq’ and ‘Amin’ therefore; he should be declared disqualified,” the plea added.