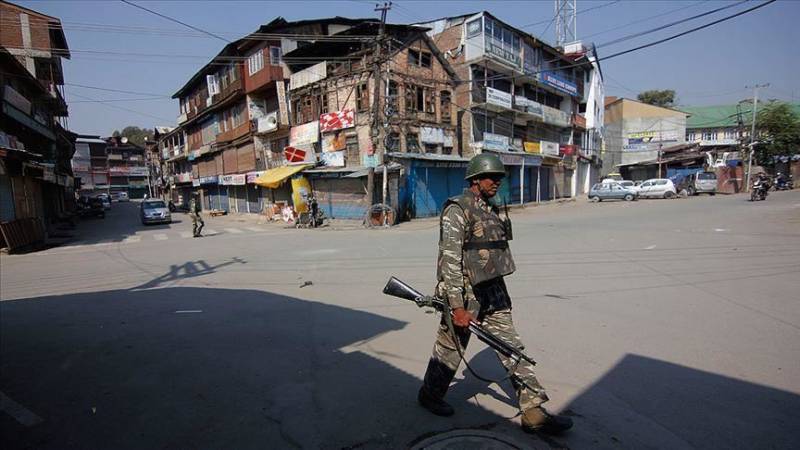 NEW DELHI – The Modi-led Indian government has decided to “revise” the school curriculum in occupied Jammu & Kashmir and Ladakh to distort the history of these disputed regions.

For this purpose, the Indian Human Resources Development Ministry has directed the National Council of Educational Research and Training to implement policies.

The revision will be carried out with focus on social science subjects, which would mainly be history.

Meanwhile, people in occupied Kashmir continue to suffer immensely due to unrelenting military siege and blockade being witnessed especially by the Kashmir valley and Jammu region on the 149th day on Tuesday.

Restrictions under Section 144 remain in place while prepaid mobile phone, text messaging and internet services continue to be snapped. Startups have become one of the worst casualties of the Internet blockade in the occupied territory. The ban has dealt a severe blow to the small ventures employing hundreds of people.

Shops also remained shut most of the time except for few hours in the day and hardly any public transport seen on the roads. Schools and offices are open but few turn up there.

ISLAMABAD – The Facebook administration has blocked live streaming of ...

After revoking special provision of Indian constitution, granting special status to Jammu and Kashmir and Ladakh regions on Aug. 5, the Delhi government has also announced to scrap a 37-year-old law in Jammu and Kashmir that permitted the return of its residents who fled to Pakistan from 1947-1954.

The law, Jammu and Kashmir Grant of Permit for Resettlement in the State Act, adopted by the state legislature in 1982, though never operational, was providing a glimmer of hope for Kashmiri Muslim migrants to return and resettle in their homes.

Many divided families living in Pakistan-administered Kashmir and Pakistan were awaiting operationalization of this law over the past 37-years to return to their homes.