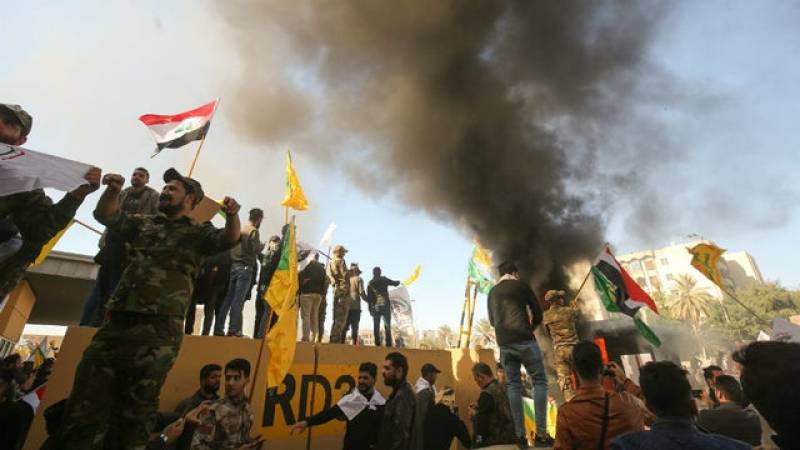 BAGHDAD – Iraqi Prime Minister Adil Abdul-Mahdi on Tuesday called on protesters to leave the territory of the US embassy and warned about severe sanctions that would follow if attacks on the embassy do not stop.

Earlier in the day Iraqi protesters set on fire the outside fence of the US Embassy in the capital of Baghdad in response to the US airstrikes against Iraqi Shia Kata'ib Hezbollah militia.

"Any aggression targeting foreign embassies will be punished by the security forces and strictly prosecuted," the prime minister said in a statement.

He added that the US airstrikes on Shia military units were strongly condemned by the government and that Baghdad has taken a series of measures to settle the situation in a way that secured Iraqi sovereignty.

President Trump on Tuesday warned that Iran would be held responsible after Iraqi demonstrators stormed the American Embassy in Baghdad to protest against recent US airstrikes in Iraq and Syria.

"Iran is orchestrating an attack on the US Embassy in Iraq.

They will be held fully responsible. In addition, we expect Iraq to use its forces to protect the Embassy, and so notified!" Trump said via Twitter.

Iran killed an American contractor, wounding many. We strongly responded, and always will. Now Iran is orchestrating an attack on the U.S. Embassy in Iraq. They will be held fully responsible. In addition, we expect Iraq to use its forces to protect the Embassy, and so notified!

Also, the Saudi government condemned the recent attacks by militias on a US-led coalition base in Iraq, the Saudi Press Agency reported. Riyadh expressed its support for the cooperation between the Iraqi government and the US-led international coalition on the investigation of the attack in Kirkuk.

Earlier on Tuesday, Iraqi protesters torched the outside fence of the US Embassy in the capital of Baghdad in response to US airstrikes, which targeted the Iraqi Shia Kata'ib Hezbollah militia in Iraq and Syria, a Sputnik correspondent reported.

Protesters at the entrance of US Embassy in Baghdad after Pompeo and Esper murdered 32 Iraqi Security Forces who were fighting ISIS on the Iraq - Syria border.

Protesters are demanding all US Occupation Forces are expelled from Iraqpic.twitter.com/EaCT1nMwjC

Protesters continue to attempt to break inside the US Embassy as American soldiers assigned to guard the diplomatic compound remain barricaded inside, according to media reports.

The US conducted airstrikes in Iraq over the objections of the Iraqi government. Now Iraqi protesters broke into the US Embassy. Trump’s malpractice in the region is making us less safe. Time for Congress to stop this foolish rush to war.

On Sunday, the Pentagon said it had carried out "defensive strikes" against five Kata'ib Hezbollah facilities in Iraq and Syria in retaliation against the group's attack on a US base near the northern Iraqi city of Kirkuk that left one US defense contractor dead and four American soldiers wounded on Friday.