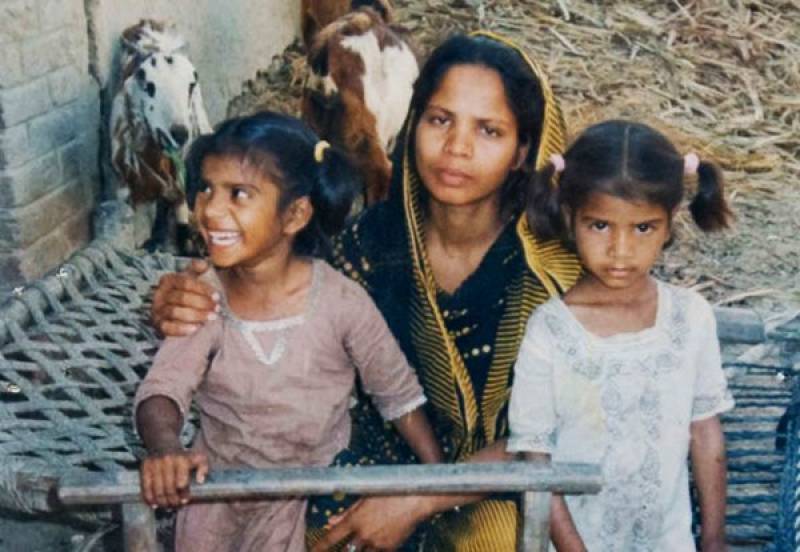 ISLAMABAD – Asia Bibi, a Pakistani Christian woman acquitted in a blasphemy case after spending eight years on death row, is set to fly to Canada where she will join her two daughters.

The mother-of-five remained hidden under government protection after the Supreme Court upheld her release earlier this week, but she is expected to depart the country imminently.

“She will fly to Canada very soon to join her daughters who are already there," her lawyer, Saiful Malook, confirmed to Arab News on Wednesday. “Yes, Canada has offered them asylum.”

Following the dismissal of review petition, Asia Bibi was quoted by another international publication as saying that she wants to hug her daughters, who have already gone to Canada.

Bibi’s daughters left Pakistan in secret and flew to Canada in December earlier this month after accepting an offer of asylum by Prime Minister Justin Trudeau. Ottawa is a leading contender to give the whole family asylum.

Pakistan's Foreign Office, meanwhile, said Asia Bibi can freely travel anywhere as she has been cleared from all charges of blasphemy from the country's top court.

ISLAMABAD – The Supreme Court of Pakistan has rejected a review petition challenging its decision to acquit Asia ...

The CJP expressed that there is clear logical inconsistency in statements of all the witnesses, they could be imprisoned forever or given the death sentence for misleading the court in such delicate case.

“We are deliberately keeping sensitivity of the case in consideration, otherwise, witnesses would have been in prison over false statements,” he included.

In a scathing conclusion, the top judge accused the prosecution witnesses of perjury and suggested they would have been jailed in any less sensitive case. He also decried the protests which met Asia's acquittal in October.

"Is this the face of Islam that we want to show to the world?" he asked.

Prayer leader Qari Muhammad Salaam had petitioned the court, asking it to dismiss its earlier judgment and uphold the death sentence brought down in 2010.

Ghulam Mustafa, who was representing the petition of Tehreek-e-Labbaik (TLP) member, said after the decision that they had no more legal options. “We wanted relief and wanted to restore her sentence but the court dismissed our review petition. This was our last legal battle. There is one more court which is above these all court and that is Allah’s court and we will get justice there,” he told the media.

Asia’s acquittal in a landmark verdict by the Supreme Court sparked violent demonstrations by the religio-political party, led by firebrand cleric Khadim Rizvi.

For days angry protestors kept the major cities paralysed, while calling for her beheading.

On November 2, the government had agreed in a deal with the protesters to follow due process to impose a travel ban on Asia Bibi, and not to challenge the review appeal in the Supreme Court.

The Imran Khan-led government has since launched a crackdown on the radical group. Much of the TLP leadership remains in police custody.

The statistics collected by the Lahore-based Center for Social Justice show at least 1,472 people were charged under the blasphemy laws between 1987 and 2016. Interestingly, majority of the accused (730) were Muslims while 501 were Ahmadis 205 were Christians and 26 were Hindus.

ISLAMABAD - Pakistan has hanged the former police bodyguard who shot dead Punjab's governor over his opposition to the ...

But the Islamic republic has yet to execute anyone for blasphemy. Most of those given the death penalty have their sentences overturned or commuted on appeal.

However despite zero execution under the blasphemy laws at least 75 people have been killed in Pakistan by angry mobs and individuals on the accusation of blasphemy during last three decades according to a report by Center for Social Justice to Fides New Agency.

"After nine years behind bars for a crime she didn’t commit, it is difficult to see this long overdue verdict as justice. But she should now be free to reunite with her family & seek safety in a country of her choice." #AsiaBibi@amnesty @Rimmel_Mohydin https://t.co/iVnLfumHYB

“They have been used to target religious minorities, pursue personal vendettas and carry out vigilante violence. On the basis of little or no evidence, the accused struggle to establish their innocence while angry and violent groups of people seek to intimidate the police, witnesses, prosecutors, lawyers and judges.”