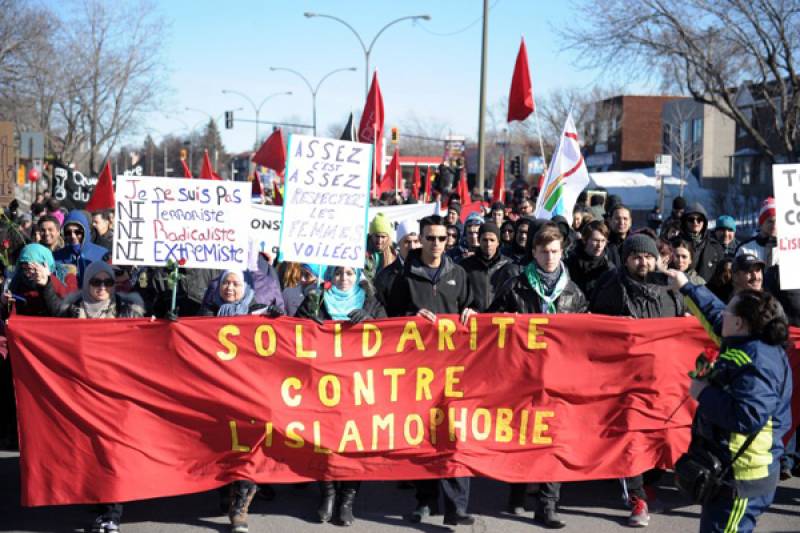 MONTREAL (Web Desk) - An anti-Islam protest by a right-wing European political organization was scuttled in the face of hundreds of counter-demonstrators in Montreal on Saturday afternoon, reports a Canadian channel CTV News.

The Patriotic Europeans Against the Islamization of the West group (PEGIDA) had organized a demonstration to oppose what it called the "Islamification" of Quebec society in the Little Maghreb neighbourhood of Montreal.

But after several hundred people from various anti-racism groups showed up 30 minutes before the event was set to kick off, police advised PEGIDA to cancel their protest.

Carrying signs that read "United against racism," "Refugees welcome" and "Smash PEGIDA," counter-demonstrators spoke out against what they described as PEGIDA's racist agenda.

"They spread hate and fear, and there's nothing to be afraid of," one protester told CTV Montreal. "All we want is peace."

PEGIDA's Quebec chapter had organized the event in an immigrant-heavy area that is home to Muslim-owned businesses, including an Islamic Centre where dozens stood guard to prevent supporters of the group from getting too close.

The right-wing organization's decision to hold a rally in Little Maghreb inflamed many of the counter-protesters.

"It's appalling; especially if they're going to walk in front of a mosque," said one counter-protester. "Why? For hatred? We're trying to get people together, not tear them apart.”

Montreal's mayor, Denis Coderre, also took to Twitter to speak out against the group in a series of French-language tweets.

"The group PEGIDA isn't welcome in Montreal," Coderre said, adding "Groups of this kind don't have a place here. All (forms) of extremism are unacceptable."

Tensions have been high along cultural and religious lines in the province since the previous Parti Quebecois-led government proposed a controversial "charter of values" in 2013 that would have restricted religious clothing for government employees.

A handful of PEGIDA supporters were on hand on Saturday, despite being outnumbered by the opposition.

Mohammed Souhail Ftouh is a Muslim who stands behind the group. He says that he left his home country of Tunisia to escape radicalization, but he says he is starting to see the same issues arise in Canada.

"I (left) my country Tunisia because of the radicalism of Islamists, and now we are meeting the same problem of these radical persons here," Ftouh said.

Police told The Canadian Press that although the counter-protest was not legal, officers did not make an effort to shut it down. There were no arrests at the event and no tickets were handed out. However, one person was put in police custody as a preventative measure.

PEGIDA, which was founded in Germany last fall but has branched out to other countries, established a wing in Quebec earlier this year.

It calls for more restrictive immigration policies to protect against what it perceives as the “Islamization” of the Western world.

The group came under fire in January, after online posts of its former leader, Lutz Bachmann, posing as Adolf Hitler and calling refugees "cattle" and "filthy" were published in the media. He has since stepped down from his position and apologized.