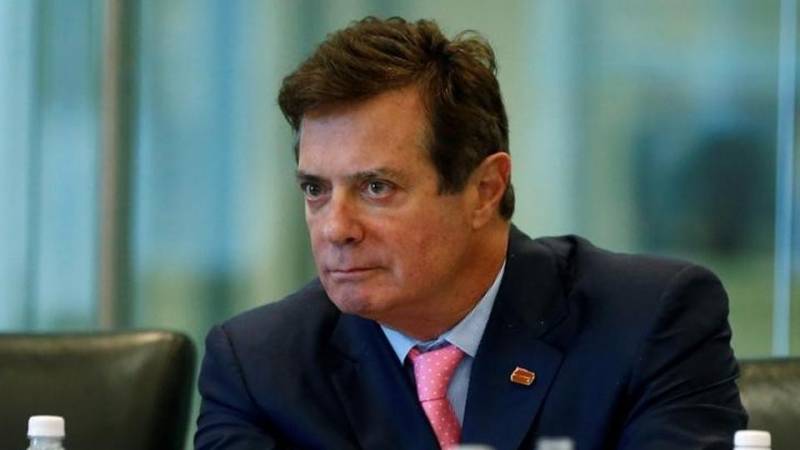 WASHINGTON - Paul Manafort, the former chairman of Donald Trump’s presidential campaign and associate Rick Gates, were arrested on Monday and charged by investigators with conspiracy against the United States, money laundering and failing to register as foreign agents while another aide has pleaded guilty to lying about his Russia links.

Manafort and Gates were indicted on 12 counts that included failure to file reports of foreign bank and financial accounts,” the office of special counsel Robert Mueller said in a statement, adding the duo was “permitted to surrender themselves” to the Federal Bureau of Investigation, which they did in the morning.

The 31-page indictment did not mention Trump or Russia. But Mueller’s office plugged that gap, unsealing an October 5 guilty plea by a Trump campaign aide, George Papadopoulos, for making false statements about ties to people who he knew had “close connections with senior Russian government officials”.

Papadopoulos was a Trump campaign volunteer who had come to be identified by the presidential candidate himself as one of his foreign policy advisers.

He had sought to set up meetings between Trump campaign and the Russian leadership, and as he wrote in an email, “including (Russian President Vladimir) Putin”.

The indictment on Manafort and Gates, handed by the jury on October 27 and unsealed on Monday, marked the first indictments and arrests in the probe of Russian meddling in US presidential election in 2016, that has dogged President Trump from the start, to mounting frustration.

Manafort and Gates will be arraigned in a federal court later— a proceeding at which the charges against them will be read out and they will be asked to plead guilty or innocent. They are expected to be released on bail. But additional charges could be be brought against them at a later stage.

“Sorry, but this is years ago, before Paul Manafort was part of the Trump campaign,” the president wrote in a much-awaited post on Twitter in his, and his administration’s, first response to the indictments and the arrests.

“But why aren’t Crooked Hillary & the Dems (Democrats) the focus?????”

And, he added, “Also, there is NO COLLUSION (in capital letters)”.

But experts pointed out that moves on Monday by Mueller’s office were just the start of the process and not its conclusion.

Additional indictments, charges and arrests could follow and, most worryingly for the president, the investigators had, in this instance, gone into an area other than the Russian poll meddling.

Manafort and Gates had worked as lobbyists and agents for the Ukrainian government and the political party of Russia-backed President Viktor Yanukovych at least from 2006 to 2015. Manafort joined the Trump campaign in March 2016 and left in August the same year, a stint lasting six months.

They had “generated tens of millions of dollars as a result of their Ukraine work”, said the indictment document, adding that in order to hide these payments from American authorities, the defendants “laundered the money” through scores of US and foreign corporations, partnerships and bank accounts. And they had failed to register as foreign agents.

Under US law, persons “acting as agents of foreign principals in a political or quasi-political capacity” must make register themselves with the government and disclose “their relationship with the foreign principal as well as activities, receipts and disbursements”.

The surrender of Manafort and Gates came hours after Trump fired off a volley of tweets on Sunday, continuing into Monday, expressing frustration with the Russia probe, and sought to divert attention towards Hillary Clinton, seeking action against her and her campaign over a mix of old and new allegations.

The president’s frustration and desperation as reflected in the capital-lettered appeal to no one in particular, could have been compelled by the expected first indictment to be handed by Mueller’s investigation.

Mueller, a highly-respected former FBI director and a Republican who was appointed to that post by Republican president George W Bush, was named special counsel by the US justice department in May after Trump fired then FBI director James Comey for failing to prevent him from going after Michael Flynn.

Flynn, Trump’s first national security adviser, was sacked for lying about his conversations with Russian officials.

Mueller’s mandate is to look not only into the Russian meddling and allegation of Trump campaign collusion, but also “any matters that arose or may arise directly from the investigation”, which has been a matter of serious concern for the White House and the president himself, who have accused the special counsel in what is clearly a pre-emptive manoeuvre of conducting a “witch-hunt”.

There have been reports that the president could fire the special counsel, who was appointed by his administration, and shut down the probe, which has caused bipartisan disquiet on Capitol Hill, home to US legislature, and lawmakers have moved legislation to prevent Trump from doing that.

Trump has also explored the prospect of using his presidential pardon to protect those indicted or charged from being prosecuted and tried, including himself, according to reports. The pardon cannot protect him from impeachment, but pretty much anything else.

The president has been frustrated by the Russia probe and the shadow it has cast on his administration almost the start, and he has denied any collusion.

He had even appeared to be sceptical about the meddling at all, that had been confirmed by the country’s intelligence community.