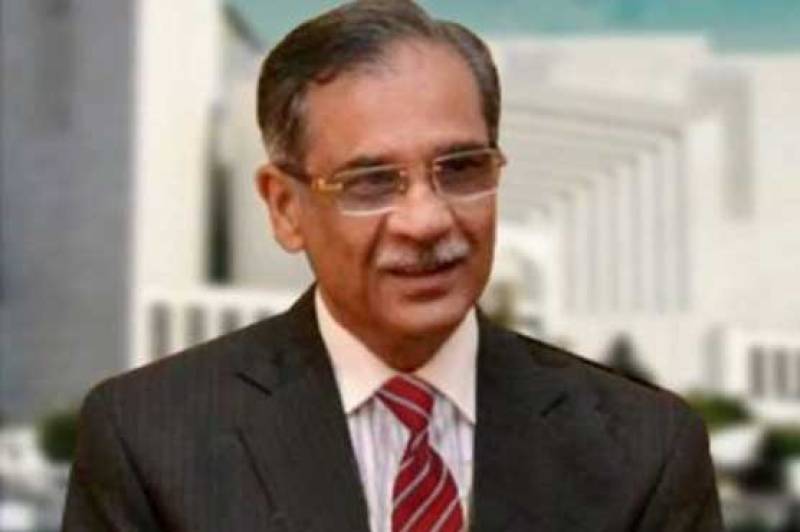 The top judge made the remarks as a three-member bench of the Supreme Court headed by CJP resumed hearing a case against fake bank accounts that were used to launder over Rs100 billion out of the country.

The director general of the Federal Investigation Agency told the court that the JIT was continuing its probe into the matter.

Expressing his satisfaction over the JIT’s progress, Chief Justice Mian Saqib Nisar remarked that he realised the JIT’s task was not easy but at the same time, the court could not adjourn the case hearing for an indefinite time.

The head of the JIT asked the court for a month to submit its final report in the investigation.

In his remarks, the Chief Justice observed that the securities loaned out to different banks were no longer present in the banks. At the same time, he hinted that Nimr Majeed, the son of Omni Group chairman Anwar Majeed, be arrested and included in the investigation.

"Where did Omni Group’s securities disappear?" the top judge asked Nimr. To this, Nimr replied that he was not aware of the matter, as he looked after the sugar mills only.

“Take Nimr Majeed into custody, and transfer Anwar Majeed to Adiala Jail as he (Anwar Majeed) is dictating all of Sindh via his phone,” Justice Nisar suggested.

Nimr Majeed was arrested by the FIA last month, but was released a day later on the court’s orders.

The top judge remarked that the court would summon representatives from the concerned banks to understand the situation better.

“We will end the case if the public’s money is returned to them,” Justice Nisar observed.

The FIA submitted its report to the Supreme Court on alleged disappearance of sugar from mills owned by the Omni Group.

The case was initially registered in 2015 against former Pakistan Stock Exchange Chairman Hussain Lawai, who is widely believed to be close to former president Zardari.

In July, Lawai was arrested in connection with the probe along with the Omni Group Chairman Anwar Majeed, and his son, Abdul Ghani Majeed, were also arrested by the FIA. Lawai, Majeed and his son remain under custody for interrogation.

ISLAMABAD - Anwar Majeed, a close aide and an alleged frontman of former president Asif Ali Zardari was arrested on ...

Investigations so far have revealed that several ‘benami’ accounts at some private banks were opened in 2013, 2014 and 2015 from which transactions worth billions of rupees were made.

The amount, according to the FIA, is said to be black money gathered from various kickbacks, commissions and bribes.