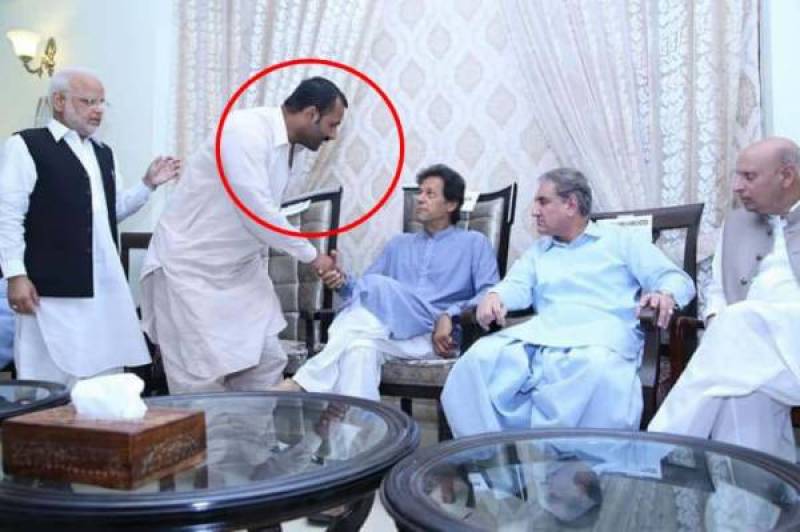 Rafique, who lost NA-131 seat to Khan during general election 2018 and is now taking part in by-election from the same constituency, shared the pictures of the premier with what he claimed is Mansha Bomb, whose arrest has recently ordered by the Supreme Court for illegally grabbing land in Lahore's Johar Town. The apex court also directed the authorities to put Bomb and his sons on the Exit Control List (ECL).

He shared the pictures, which also invited wrath from some PTI supporters on the Facebook, with a caption: "You were asking about who is Mansha Bomb and for whom he works. Here you can see".

Bomb can be seen in the pictures, which have not been rejected or verified by any PTI member, meeting Imran Khan at an event while Shah Mahmood Qureshi, foreign minister, is also present.

In another picture, the alleged land grabber is meeting Abdul Aleem Khan, a stalwart of the PTI and sitting provincial minister.

On Monday, the Supreme Court accepted the unconditional apology of PTI Lawmakers asking the party leadership to take appropriate action against them in a case related to interfering in official matters.

PTI MNA Malik Karamat Khokhar and MPA Nadeem Abbas Bara appeared before the court and requested for an unconditional apology.

Karamat said he did a mistake by helping the son of Mansha Bomb who belongs to my clan.

The CJP remarked he respects the lawmakers and he (Karamat) should not do this again.

As the hearing went underway, the police superintendent apprised the bench that Mansha bomb along with his sons was accused of illegally grabbing land in Johar Town.  “70 cases have been registered against Mansha,” the SP said.

“When we took action on the court’s orders, we started receiving calls to stop our operation,” the police official said.

In response, the chief justice inquired who had called the police officer to ask for favors. The SP then told the judge that Khokhar had asked the police to not arrest Mansha Bomb.

“Did the nation vote PTI to power to become thugs? Will they make naya Pakistan’ by helping criminals?” the chief justice remarked.

Issuing orders to immediately arrest Mansha, the court on Sunday directed Khokhar and Nadeem to come to Islamabad for further hearing.