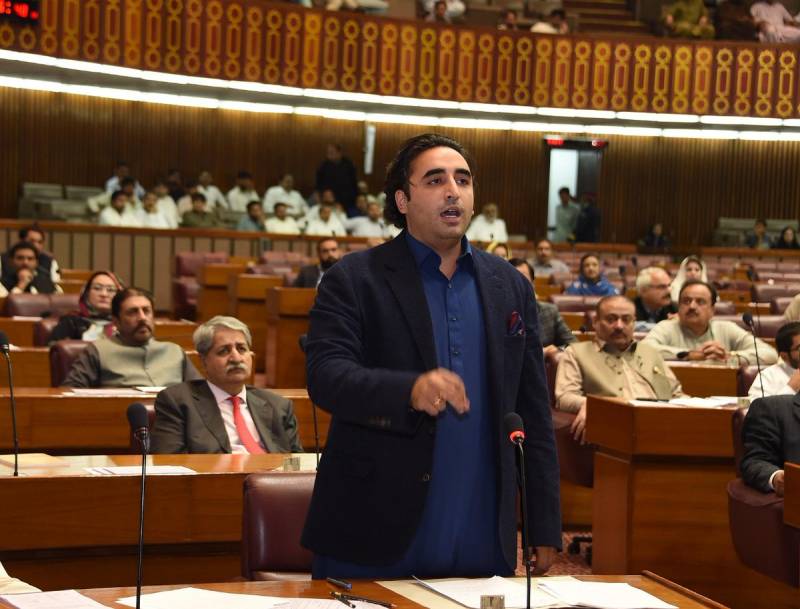 ISLAMABAD - Members of the opposition created ruckus in the National Assembly on Thursday after Pakistan Peoples Party Chairman, Bilawal Bhutto Zardari fired a broadside at the ruling regime.

Bilawal Bhutto, in his speech, expressed that the core cause behind inflation was the incompetence of the government. He also called upon the government to implement the National Action Plan.

Bilawal shared that those who cursed on the parliament and talked about 'umpire's finger' were not able to tolerate the criticism.

The PP chief reiterated demand to expel the ministers suspected of ties to militant outfits. The lawmaker stressed the government to present the agreement made with the IMF before the House.

Murad also talked about former cop Rao Anwar and the fake accounts allegedly owned by senior PPP leaders, however, members of the opposition, mainly from Pakistan Muslim League Nawaz, started interrupting the speech and chanted: No baby no.

The PML-N members demanded that former foreign minister Khawaja Asif should be allowed to speak following which the Speaker Asad Qaiser asked Murad Saeed to complete his speech to which he complied with, however, warned that the members of the opposition would not be allowed to speak for displaying such behaviour.